The church ruins of Zsámbék

The immediate predecessor of the ruined church was built around 800 years ago on the slope of Nyakas-hegy. The picturesque building is one of the most interesting ruins in the country and popular not only among tourists but as a site for wedding photography too. Its surrounding area is a favoured venue for theatre performances and other events as well.

Although there are evidences for the existence of a stone church in the 1050s on the slope of Nyakas-hegy (Zsámbék), the immediate predecessor of today’s ruined church was built only between 1220 and 1234 by descendants of a knight called Aynard. He was a confidant of Margaret of France, wife of Béla III, and obtained Zsámbék as a royal grant. During the reign of Béla IV, the church and the adjoining Norbertine monastery possessed a considerable wealth and had a community of 20 monks.

The first hard hit to the church was a fire in the 15th century. Then, as the monastic order fell into decline, it was donated to the Pauline Order by Matthias I. They extended and remodelled the building adding Gothic elements to the design. Constructions continued during the Turkish occupation too, however, in order to transform the building into a fortress. Certainly, this fortification greatly contributed to the survival of the church throughout the 17th century.

The most devastating event in the building’s history took place in 1763, when the greatest earthquake of the country struck the area with an estimated magnitude of 6.3 on the Richter scale (just for comparison, Hungary tends to have earthquakes with a maximum magnitude of 2.5-3.0, perceivable but no damage). No wonder, the northern aisle gave way and collapsed. Most of the stones were scavenged by locals for their own use and the building remained truncated.

Flóris Rómer and Imre Henszlmann, pioneers of heritage conservation in Hungary, made a point of preserving the church in the 19th century. They directed public attention to the importance of the building in the 1870s, and finally, it was conserved by architect István Möller in 1889. Fortunately, he did not follow a purist guideline and eliminate younger stylistic elements but preserved every detail. The structure was also strengthened partly with original stones. This is also what made the church ruins of Zsámbék an iconic example of Hungarian heritage conservation as well as one of the most important representatives of medieval architecture in the country.

The ruins of the monastery north of the church was excavated by Kálmán Lux in 1934. The barrel-vaulted hall hosts a lapidarium today as well as the refectory, a wall of the cloister and the cellar remained relatively undamaged too. Excavation is still incomplete and despite several plans have been made to preserve the building, its future is uncertain.

For a drone video of the ruins click here.

Check prices on the spot.

31
from Nagy Gábor,   Együttműködő szervezetek
Show all on map 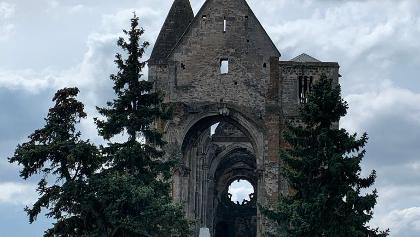 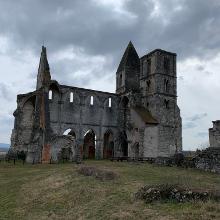 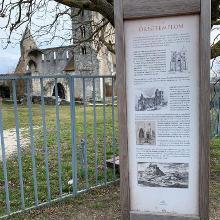 The church ruins of Zsámbék