Even the path itself ascending on the eastern slope of the hill is well-worth the effort. The grassy plateau awards relentless hikers with a 360 degree view over one of the most exciting corners of Balaton Uplands as well as the ruins of Csobánc Castle.

Buttes of western Balaton Uplands tower like bastions over Tapolca Basin and Káli Basin. Their slopes with vineyards and their signature shape make them special elements of the local landscape. Some are conic with a pointed peak but the most popular ones, such as Badacsony, Szent György-hegy or Csobánc bear a flat plateau.

Although the plateau of Csobánc is quite small it is large enough to seat a castle ruin. There is a stunning view over Káli Basin, the surrounding buttes and, of course, Balaton. The green plateau of Keszthely Mountains lies behind the flat basin and lower hills of Bakony Mountains are visible in the north, too. The switchback on the eastern slope also grants a splendid view during your hike uphill.

The construction of the castle began in the mid-13th century at the request of the nobles in Diszel. Over the next century it passed into the hands of the South Italian Gyulaffys from the Rátót clan. When Maximilian Habsburg attacked the country after King Matthias’ death the castle was fortified upon the order of Pál Kinizsi. Following the capture of Buda by the Turkish Csobánc Castle became one of the forts defending the new borderline along Balaton separating regions under Turkish and Habsburg rule. At the time László Gyulaffy was the castellan of the castle, who later earned fame and reputation during the siege of Veszprém.

In 1561, the neighboring Castle of Hegyesd fell in the hands of the Turkish, however, Csobánc could resist more attempts over the next years. After a few peaceful decades and face-lifts the Esterházys obtained the castle in good shape in 1669. In the 1690s, Ádám Béri Balogh did his military service here, who later became a legendary general of Rákóczi’s War of Indipendence.

Following the expulsion of Turks the Habsburg court decided to destroy the castle. This plan was disrupted by the start of Rákóczi’s war. Csobánc was in the hands of the Habsburgs until 1705 when Hungarian troops captured it. In February, 1707, retreating Habsburg troops with 1000 soldiers tried to recapture the castle but they failed against a much smaller group of defenders under the leadership of Márton Szász with 30 riflemen and 30 nobles who sought refuge in the castle with their families. The besieging troops had nearly 400 casualties and left. Today the names of the defenders are displayed on a memorial plaque at the ruins.

Finally, in 1709 the Habsburgs recaptured the castle and exploded it. There is very little left of the once impressive building complex. During an archeological excavation in 1953 some pieces of renaissance style door and window frames were preserved but no further steps ahead were taken until 2003. A new chapter in the story of the decaying ruins began when inhabitants of Gyulakeszi established the Foundation for Csobánc Castle and László Gyulaffy Historical Society. Enthusiastic locals have been contributing to preserve and develop the castle and bring back some of its old glory. Thanks to the Hungarian Hikers’ Association it has become a stamping location for the Blue Trail, too.

open today
Open all year round

A loop hike to explore a butte with one of the most stunning views of Balaton Uplands, ruins of a medieval castle, wine cellars and two vintage ...

Panoramic loop trail on Szent György-hegy, an extraordinary butte with basalt columns, 4 beautiful chapels at the bottom of the hill, Kaán Károly ...

from Edvárd Rózsa,   Magyar Természetjáró Szövetség
Show all on map 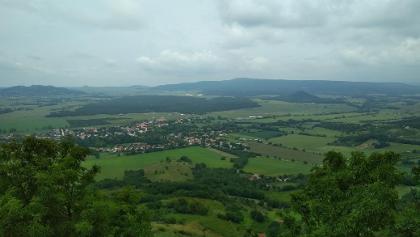 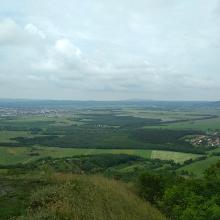 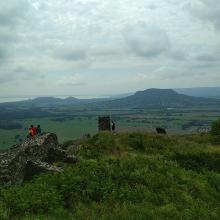 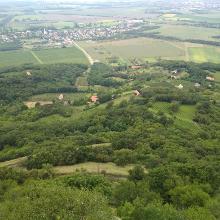 A loop hike to explore a butte with one of the most stunning views of Balaton Uplands, ruins of a medieval castle, wine cellars and two vintage ...