The English garden of Tata

The first English garden of the country was commissioned by Count Ferenc Esterházy in 1783. The Small Castle near Cseke Lake in Tata used to serve as a summer retreat for the family. Besides design, its romantic character is further enhanced by ruin follies, ponds and a Turkish mosque.

The first English garden in Hungary was designed by Ferenc Bőhm and commissioned by Count Ferenc Esterházy. The first trees around the artificial Cseke Lake and Old Lake were planted in 1783. English gardens designed to recreate an idyllic natural landscape gained popularity in the 18th century in England. However, in continental Europe, it was only a century later, when it replaced the more symmetrical French formal garden as the principal gardening style, therefore, the one in Tata was not only the first in the country but pioneered continent-wide too.

The design of such a garden is inspired by nature, though somewhat in an idealized manner. Basically, it is harmony with the environment and left unfenced. Plants are planted in groups and with a great contrast to create a beautiful view from every direction. What made the garden in Tata extraordinary was not only its innovative shape but also its one-time extension over the whole town.

The park features several elements to enhance its romantic character, such as small bridges, pavilions, a cascade, winding pathways and merely its lakeside location. The two stone griffins at the entrance were made by sculptor Antal Schweiger. The fully restored Palmhouse serves as an event centre today but in the early 20th century also it functioned as a prestigious entertainment facility for locals and visitors from the capital. The pathways are bordered by various buildings, such as a cave folly called “Hell” with an artificial spring on one side.

The earliest building in the park is the Late Baroque style Small Castle built to serve as a summer retreat. Check the stairs to the terrace. They were meant to imitate the concentric ripples on water surface as caused by a pebble dropped into. The sloping area in front of the building was used for theatre performances during Count Miklós Ferenc Esterházy’s time.

A ruin folly in the northern part resembles a 3-nave church designed by renowned French architect Charles Moreau in 1801. Sadly, during the construction pillar elements from the (real) ruins of the 12th century abbey in Vértesszentkereszt were also integrated.

The octagonal Turkish mosque folly was built in 1840, allegedly on the site of a Turkish hermit's hut. The bench nearby named after Ferenc Kazinczy commemorates the visits that the renowned author paid to the park. The southern segment of the garden has functioned as one of the key national training centres of Hungary since 1948.

In the 2010s, the garden and its buildings were restored nearly to its original state according to a layout plan from 1823, renovating the follies, the Small Castle, the Palmhouse, and building an open-air stage with 700 seats.

An amble around Cseke Lake (around 2 kms) is quite comfortable to complete. The pathway is bordered by weeping willows (and some fishers). Interestingly, this Chinese species of trees, as one of the favoured ones in romantic garden design was planted here first in the country. The garden between the lake and the training camp features majestic plane trees, which, being hybrid specimens, are of special botanical value. 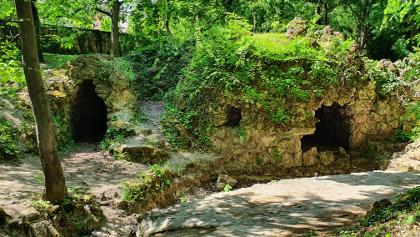 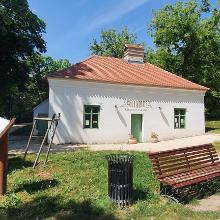 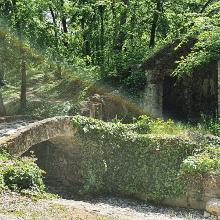 The English garden of Tata