The hikers’ lodge built on the top of Dobogó-kő (699 m) in 1906 awaits visitors with a restaurant, an eatery and a hiking museum. As one of the oldest and best-known lodges in the country take your time to visit it during your hike in the Visegrád Mountains.

Visiting Dobogókő it is easy to identify the cozy classic style hikers’ lodge on the top right next to the lookout terrace recalling the golden age of hiking. You can have a bite in the snack bar or choose from the extensive menu of the restaurant. The lodge offers 3 rooms with double bed, 1 room with 3 beds, 2 rooms with 8 beds and 1 room with 6 beds. Occasionally, traditional Hungarian meals are cooked outdoors.

History of the lodge

It was Ödön Téry, editor of Hikers’ Journal, who discovered and promoted the beauty of Dobogókő. Whenever an article was written on Pilis he never missed an opportunity to praise the view and natural beauties to readers. However, due to adverse transport facilities it was not a proper destination for a day hike. This deficiency brought about the need for a lodge. Although planning started in 1889 it was only in 1898 when the hikers’ lodge opened. It soon gained immense popularity among hikers and the idea of expansion rose in a few months. Finally, a new lodge made of stone opened in 1906.

A year later a barn and a cart shed as well as a spacious porch were built. Later a telephone and gas line was installed. By that time it could accommodate up to 150 guests. Past WW2 the hikers’ association was dissolved. First, the buildings were transformed into a workers’ hostel and some parts were pulled down but later the whole complex was left to decay. After the political changes the hikers’ association regained ownership and began restoration by voluntary work, donations and tenders. The smaller building, which used to fulfill a range of functions, such as a nursery school, a telephone exchange, a storage room and a garbage dump, is home to the Hiking Museum today.

Since 1898 the first mountain observatory built by the National Institute of Meteorology has been operating near the lodge.

The ambience of the building grants a travel back to the early 20th century, the old times of hiking. As the motto in the hallway reads: „May this little house stand for long! May it resist storms and blizzards, serve the cause it was created for! Let it be a compass and attracting magnet of the splendid mount it was built on! Let it be a blessing for the land, pleasure for the hiker, home to joy and peace!”

Number of beds in dormitory
44 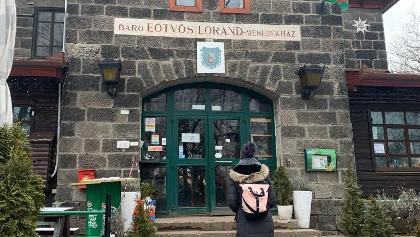