The highest of the buttes around Balaton rises majestically on the lakeside. It rewards hikers with wonderful views, geological rarities and renowned wines for their effort.
open
easy
Distance 5.9 km
Duration2:30 h
Ascent437 m
Descent437 m

You may explore Badacsony in a short but spectacular hike visiting basalt columns of Kőkapu and adjoining scree slopes as traits of volcanic activity as well as the abandoned basalt mine pit of Tördemic, the former site of basalt mining for decades.

You will climb to Kisfaludy Lookout Tower sitting at the top of Badacsony, walk the Stairs of the Outcast (Bujdosók lépcsője) and enjoy the view from Ranolder-kereszt (Ranolder Cross), the viewpoint of Tördemic and Egry József observation platform. Altogether, the lookout points will provide a 360 degree view around Badacsony including Balaton, Tapolca Basin and Káli Basin. In addition, you may test the magic power of the legendary Rose's Rock.

Last but not least, you may taste fine wines of Badacsony, as volcanic soil of the southern slope is excellent for winegrowing. No wonder that many famous Hungarian wineries are located here.

Start along the Blue (K) trail, then change to the Red (P) trail, and finally follow the Blue (K) markers again to walk around Badacsony.

Start along the Blue▲ (K▲) trail from the parking lot above Kisfaludy-ház. You will soon arrive at Rose's Rock (Rózsa-kő). The legend has it that poet Sándor Kisfaludy used to sit here a lot together with his wife, Róza Szegedy to enjoy the view. However, a folk legend is also associated with this rock that lovers who sit on the rock, hand in hand, with their back to the lake will get married within a year. What's more, the magic works even if only a girl sits there alone and heaves a sigh thinking about her lover. After trying this and hoping for the best, whatever it may be, proceed along the trail.

After climbing the stairs you will arrive at Ferencz Hertelendy (1859-1919) Monument. He contributed a lot to building the railways along the northern shore of Balaton as the Vice Chairman of Hungarian Winegrowers' Association and Balaton Association. Check the lookout point below to enjoy the view over Badacsonytomaj, Ábrahámhegy and Balatonrendes.

Turn right onto the Blue (K) trail. A pleasant forest path will guide you to resting spot with benches and an abandoned building. Turn right here and you will soon reach Kisfaludy Lookout Tower at the highest point of Badacsony. It will reward you with a 360 degree view over the nearby buttes, Tapolca Basin and Káli Basin, as well as Balaton.

Walk back to the junction and continue your hike to the right along the Blue (K) trail. You will soon arrive at the next junction, where take a detour to visit a great lookout point (follow the sign) and enjoy the view over basalt columns, scree slopes and other buttes.

Return to the junction and turn left to get to the gorge of Kőkapu (Stone Gate). Descend along the gorge to visit the most beautiful basalt columns of Badacsony. While cooling erupted lava shrank causing tension inside. Vertical tension could be accommodated by the elastic molten rock beneath but horizontal tension could not be relieved so basalt fractured into vertically standing columns, predominantly hexagonal in cross-section. Later post-volcanic heat changes and water took over the main role. Water freezing in cracks as well as changes in temperature further contribute to an extensive fracture network. These cracks kept growing and reached deeper and deeper. Basalt scree at the foot of the columns are telltale signs that this process is a currently ongoing.

Past Kőkapu continue to the left along the Blue (K) trail. At the junction turn left and change to the Red (P) trail. This section shares the same path with Badacsony Nature Trail that traverses around Badacsony displaying features of local geology and wildlife. Do not miss the numerous minor viewpoints along the trail.

Next you will hike past an abandoned basalt mine pit (Basalt mine of Tördemic). It was closed in 1964. Some of the exploited basalt was transported to Badacsonytördemic by ropeway, and some was carved locally for road construction.

Proceed along the Red (P) trail to the western slope of Badacsony. The path leads along the rim providing a splendid view all the way. At Rodostó Hikers' Lodge turn left onto the Blue (K) trail. At the next junction you will encounter your next challenge on the left: Stairs of the Outcast (Bujdosók lépcsője). Climb the 465 stairs to reach the top. Landings were named after historic characters of the Kuruc Era (in the late 17th and early 18th century) contributing to the fight for independence while the name "Stairs of the Outcast" itself commemorates those living in exile after Rákóczi's War of Independence.

At the top of the stairs a picnic spot awaits you with benches, a fire pit and a rain shelter. Proceeding to the left you can reach the lookout point of Tördemic in a few minutes to have one last farewell look at the buttes.

From the picnic spot continue along the Blue (K) trail passing a series of viewpoints. The first one was named after Marie Henriette of Austria, Queen of the Belgians. Just past a few steps you can enjoy the view from Ranolder Cross erected by János Ranolder (former bishop of Veszprém, winegrower, patron of winegrowing in Balaton region) in the mid-19th century, who called Badacsony and surroundings "the most beautiful place in the world". The cliff just below the cross is called "Tolling Rock" because it allegedly sounds like a church bell when hit with a hammer.

The next lookout point was named after renowned painter József Egry who was deeply inspired by Badacsony. The observation platform is a bastion-like stone building with a view over Balaton and vineyards of Badacsony. Continue your hike and the trail will pass dr. Lajos Jugovics Monument (reputable geologist and univ. prof. mostly engaged in studying basalt rock) and return to Ferencz Hertelendy Monument. Turn right onto the Blue ▲ (K▲) trail and walk down the stairs to Rózsa-kő and to the parking lot. 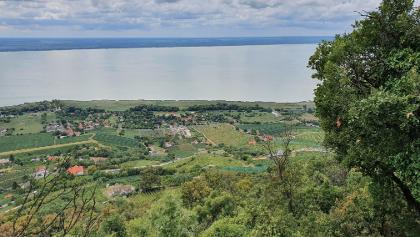 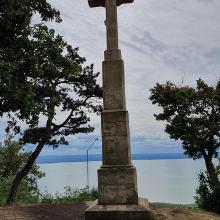 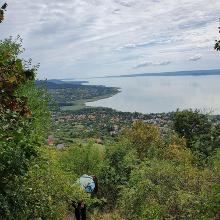 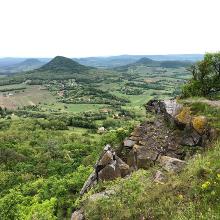