The open-pit bauxite mine in Gánt used to produce the greatest volume of bauxite in Europe. By today it has been closed down and it is open to public to explore the red mounds resembling Martian landscape.

In 1920, mining engineer Jenő Balás discovered a huge bauxite deposit near Gánt, a peaceful and unknown village at the time. Following a lengthy preparation extraction began in 1926 with a large strip mining site around the village.

In the 1930s it was among the most productive mines of the world. No wonder Germany overtook control during WW2 to satisfy aluminum needs of arms industry. It was 1953 when the mine reached its peak capacity at 600,000 tons of ore. Altogether it produced 10,000,000 tons of bauxite throughout its operation. The mine belonged to industry leaders not only by volume but quality also as bauxite ore with low silicic acid and high titanium, zirconium, chrome, gallium and beryllium content was extracted here.

Strip mine pits opened one after the other, the last one in the early-1980s (this is the site for the educational trail). By 1987 extracting the local deposit was no longer economical and the mine was closed down. Since then many of the mine pits have been reclaimed and reforested.

What is bauxite good for? It is the raw material for aluminum oxide used to produce aluminum metal. Carbonate bauxites occur predominantly above carbonate rocks (limestone and dolomite), where they were formed by lateritic weathering and residual accumulation of intercalated clay layers. Dispersed clays were concentrated as the enclosing limestone gradually dissolved during chemical weathering. Aluminum, titanium and iron accumulated as oxides. Bauxite is a paleoclimate indicator as its formation requires humid tropical climate.  Consequently, the plate of West Hungary used to be located in a tropical region and drifted to its current place later.

An educational trail with 13 stations in the geological park provides information on details of local geology and mining. It takes around 1-2 hours to explore the trail winging around the red terrain.

Just outside Balás Jenő Museum of Bauxite Mining an old steam engine, an electric engine and mine carts are displayed. Inside the museum various photos and drawings help to imagine life in the mines while walking along a 100-meter-long mine tunnel. Hand tools, power tools and machines are also displayed including even a petrol-driven truck as bauxite mining allowed their use as opposed to coal mining.

Educational trail: open all year round

The educational trail is free of charge 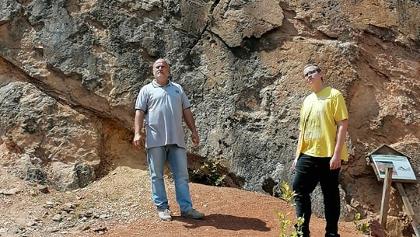