In exchange for a short climb from the side of Nagy-Kerek Hill, we can see the rooftops of Zebegény, the slowly flowing Danube and the hills of Pilis from above.

Zebegény is a charmingly attractive village offering a host of activities and sights. From the summer of 2015, a small wooden lookout tower awaits those looking to marvel at the fairytale-like scenery of the Danube Bend at the hillside above it.

A little bit of history

The “predecessor” of the building, an iron structure tower stood nearby, at the site of the Trianon Memorial from the 1960s until 2014. As the structure became a safety hazard over the years, it was demolished, and a new one was built out of wood a bit further away on Kálvária Hill. The tower, designed by Árpád Csóka, is rich in symbolism. From the front, the building resembles a Roman watchtower. The Roman defensive line, Limes used to run here in the old times. The bottom part of the tower named after Károly Kós is shaped like a Szekler gate, honouring the Transylvanian origins of the architect.  From the side, it looks almost like a chapel, a reference to the Havas Boldogasszony (St Mary Major) Parish Church, which was designed and built by Kós in the centre of the village.

We can enjoy the most beautiful view from the offset lookout terrace in the early morning sunshine—starting our tour from Zebegény, it is best to climb up here first. On this side of the Danube Bend, the landscape is decorated with the buildings of Zebegény. Looking left on the bank of the Danube, we can see the white building of Dőry Castle, and slightly to the right from it, the famous Seven-holed Bridge, one of the oldest industrial monuments of Hungarian railway history.

On the left side, across the Danube, we see the outer row of houses of Dömös. On its right, we can survey the hills of Pilis and Pilismarót nestled in at centre stage a bit farther away from the river bank. In the far right, the hills of Burda and the south-western block of Börzsöny are visible.

If we want to get a true bird’s eye view of the Danube Bend and a complete panorama of Visegrád, Nagymaros, the northern tail of Szentendre Island and the backward curve of the Danube, we can take a short hike up to the Julianus Lookout Tower on Hegyes-tető following the yellow (S) trail.

Who it was named after

The building is named after Károly Kós (1883–1977), an architect and writer of Transylvanian origins, who is also responsible for the beautiful Art Nouveau design of the Havas Boldogasszony Parish Church. If we want to walk up to the lookout tower from the centre of Zebegény, we can choose the yellow (S), the green (Z), the blue cross (K+) trails or the blue bicycle route, as they all pass by the building. Kós not only designed the exterior and the interior of the church, but also the furniture, and the coloured glass windows are his handiwork too. His work was most significantly influenced by the architecture of Szeklerland; his favourite patterns were the ones from Kalotaszeg. Besides his distinguished work as an architect, he also excelled in his work as a writer, publisher, graphic artist, politician and educator.

Freely accessible all year round.

This pleasant, fairly level tour takes us across the volcanic hills of South Börzsöny. In Törökmező, tasty bites and agility challenges wait for us.

1
from Ádám Németh,   Magyar Természetjáró Szövetség
Show all on map 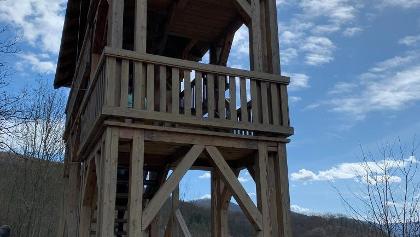 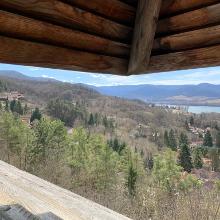 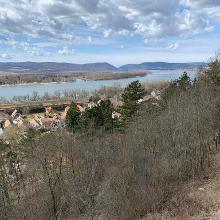 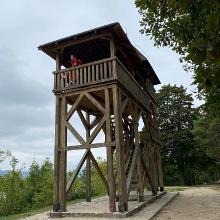 This pleasant, fairly level tour takes us across the volcanic hills of South Börzsöny. In Törökmező, tasty bites and agility challenges wait for us.