Looking for an extraordinary hiking destination near Budapest? Holdvilág-árok is a perfect pick. The untamed world of rocks presents the structure of a one-time volcano layer by layer along an adventurous path in a streambed.

As closed gorges in the mountains were hard to access for long, their mystical atmosphere often inspired folk believes and legends. This holds for Holdvilág-árok too, which gained popularity not only by its natural values but the cult around it as well.

Exiting Kiskovácsi, Red + (P+) trail leads into the gorge. Although it bypasses the hardest accessible part, the unmarked path will take you through the narrow trench.

The gorge is dry for most of the year, except after snowmelt and heavy rains. That said, as the southern edge of the mountains is largely covered by dacitic tuff, even short-lived streams with low runoff can etch deep in the soft rock.

The path winds along the gorge crossing the creek at fords and bridges, slaloming between boulders and fallen trees (Accessibility is granted by the forest management by removing larger obstacles). The trail leads out of the gorge on stairs on the left to bypass the ladder on the headwall. However, even if you take the easier way, take your time to proceed a few meters and check the amphitheatre of towering rocks.

It clearly demonstrates local geological history presenting various stages of volcanism. While at the beginning of the gorge you can see outcrops of sedimentary bedrock broken by emerging magma, this end shows the results of pure volcanic activity and erosion. The side of the rock is segmented by horizontal line indicating layers of deposits from single eruptions. The light-coloured and soft tuff layers are made up by cemented dust, ash and scree fallen after volcanic explosions. The dark upper layer of higher density is a result of a phenomenon with ruthless powers released during an eruption. When a mixture of hot gases and scree swept along the slopes of the volcano (aka pyroclastic surge), a hard layer of rock (breccia) was formed at the foot.

Of course, the stratigraphic structure of Holdvilág-árok is more complex than described above, but basically, it is the altering hardness of the layers that fundamentally determined the formation of the gorge. The seasonal waterfall of the headwall, for example, is just the spot where the stream broke through the massive upper layer and could etch into the softer tuff layer like knife through butter. Consequently, climbing the ladder takes you to a quite different environment as the harder rock layer there is more resistant to waterflow.

The ladder (called Meteor Ladder) was built in 1965, but it is not the only sign of human activity in the cauldron. The hollow at the bottom called Y Cave is supposedly manmade too, but its one-time role is uncertain.

Just above the ladder a bridge leads to Nagy-szikla (Great Rock) or you can bypass along the Red + (P+) trail. The gorge shows a different side from here as it winds around in a dark and narrow passage. After a few turns the volcanic alley arrives into a light and soft rock layer again with towering rocks on the sides. Soon the gorge inclines and turns into tame gully. Here you can take the Red + (P+) trail again joining from the left to get to a picnic sport.

For those interested in legendary sites of Holdvilág-árok or wishing to return to the starting point it is advisable to return along the Red + (P+) trail. The tuff wall of Nagy-szikla is just a short walk away. Besides archaeological finds, rock-hewn niches and an artificial cave named after an outlaw (Weislich), an ancient legend also contribute to make it the cradle of historical theories and folk beliefs. Briefly, the legend has it that the site of Ancient Buda was around here as well as Princess Árpád was buried at the spring of a stream flowing in a stone streambed. Accordingly, pagan ritual sites and the grave of the Princess were supposed to be found. However, these theories have never been proven.

The pathway in the gorge slaloms between various obstacles, which normally does not pose serious risks. However, snowmelt or rains make the trail slippery and dangerous, as well as the stream may be challenging or impossible to cross. If the ladder is icy or wet, do not attempt to climb.

You DO NOT HAVE TO climb the ladder! You may as well bypass the tough part along the Red + (P+) trail.

Climbing the walls is dangerous to life, therefore forbidden. It is also forbidden to leave the trail exiting the gorge as the edge of the rock is hidden by underbrush.

2
from Áron Dömsödi,   Magyar Természetjáró Szövetség
Show all on map 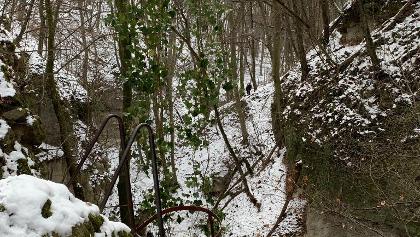 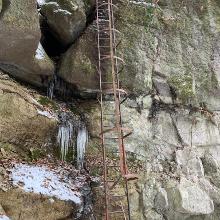 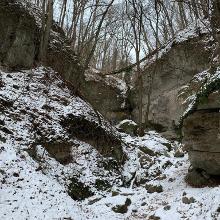 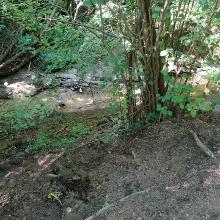