Responsible for this content
Magyar Természetjáró Szövetség Verified partner  Explorers Choice
Covering the 25th section of the Blue Trail you will explore Szalonnai-karst rising above the valley of Bódva Creek and rolling hills of Cserehát stretching until the valley of Hernád. Despite local economic adversity, natural values, traditional architecture and tiny villages will make your hike here an enjoyable experience.
open
easy
69.3 km
20:05 h
1505 m
1510 m

Head towards the valley of Bódva Creek. Cross the creek through the overpass and continue towards the truncated Esztramos Hill. Traversing the slope of Esztramos you will arrive at Bódvarákó. Cross the single street village and hike steeply uphill Szalonnai-karst. Past the mountains you will reach the tiny village of Tornabarakony. Exit the village and cross Barakonyi Creek to traverse Torna Hills and reach the valley of Rakaca Creek.

Past Rakacaszend and across Rakaca Creek the trail ascends in the woods passing rock outcrops of Rakaca marble. Hiking along dirt tracks etched into the young sedimentary bedrock the trail steeply descends into the valley of Vadász Creek with Irota, the tiny dead-end village. Climbing out of the valley and crossing humps you will arrive at Felsővadász, then Nyésta and Abaújszolnok. Past the village the trail arrives at lower hills of East Cserehát. Hike across fields to reach Baktakék and ascend slightly to Fancsal. Past the village the trail crosses fields again and arrives at the valley of Devecser Creek with Abaújdevecser.

Your hike continues on a paved road in the valley of Hernád passing Encs and Gibárt. After hiking across the bridge over Hernád in Gibárt and crossing the village the trail changes to a dirt track. Traversing fields with a view over Zemplén Mountains you will arrive at Alsócéce, where head towards the mountains to end this section at Boldogkőváralja train stop.

Hike 2 more kilometers along the Blue (K) Trail to enter the village.

Follow the Blue (K) markers all along the trip.

The trail exits Bódvaszilas along the former industrial railway running south. After crossing the rails turn left and in 100 meters take the farm track. Past the bridge over Bódva Creek head right and cross the sweet meadows to reach Juhász Creek and the railroad again. Follow the trackbed to round the truncated Esztramos hill. It was former mining activity that discovered Rákóczi Cave inside the hill. The trail arrives in the tiny village of Bódvarákó (stamper on the fence at 23 Szabadság Street). Passing several houses representing traditional rural architecture you will reach the edge of the village. Past 600 meters and the decaying farm buildings turn left.

The trail soon begins a lengthy and steep ascent to Balogh Pál parlag on the top. Make a short detour downhill along Blue L (KL) to the ruins of the Pauline monastery of Háromhegy. The monastery founded in 1341 was recently renovated.  Proceed along the Blue (K) Trail to reach the peak of Mile-hegy (405 m) and hike downhill to leave the karst hill behind. After crossing the young pine woods of Slokk-tető the trail joins the paved road to Tornabarakony. Turn right and proceed to the village. It was abandoned during the Turkish rule and later got inhabited by Rusyns, however, by today population has dropped dramatically.

Hike along the descending main street until the Greek Catholic church (stamper on the fence opposite the church) where turn left to leave the village. Past the bridge over Barakonyi Creek continue along the dirt track to climb to the ridge of Barakonyi-hegy. While Szalonnai-hegység, which you just left behind is composed mostly by Triassic limestone and dolomite, Torna Hills are dominated by young Quaternary sedimentary rock (clay, sand). The trail parallels the edge of the forest but soon enters the woods. On the ridge where the track forks, head left to descend into the valley of Rakaca Creek and enter Rakacaszend (stamper at the food store and at 7 Fő Street). Crossing the village take your time to visit the listed reformed church building on the hill. It was built in the 12th century and has been rebuilt many times but the original painted wooden ceiling and remnants of some old frescos have survived.

The trail traverses on the exposed side of Kopasz-hegy (268 m). After passing the György pada on the right covered with a pine grove you will arrive at Isten-töltése and descend to Kocsma-lápa along a dirt track. The trail soon reaches the edge of Kecske-pad. At the junction head south and past a few hundred meters take the logging track leading to Boros-erdő. Later the paved road changes to a dirt track. Upon arriving at the fields you can spot the village of Irota. Descend into the valley of Vadász Creek (nearly inaccessible in rainy weather) and cross the little timber bridge to enter Irota. The tiny village in the heart of Cserehát is famous for its houses representing traditional rural architecture as well as the Greek Catholic church on the hill and its iconostasis.

In the center turn left and head towards Vesszős-oldal. Hike uphill between a fence and a shelterbelt. The trail skirts a field and bends right as it reaches the forest. Along a slight ascent parallel to the woods you will enter Cinceg-erdő. From there onwards the trail traverses woodland. As it reaches the saddle before Grajcár-tető it begins an descent along a dirt track through the fields. Turn right onto the dirt track to Felsővadász running parallel to the paved road. In a few minutes you will enter the village. The stamper is placed in the tobacco shop in Ady Endre Street and further along the trail in the grocery store in Dózsa György Street. The two-storey castle in the village was built by the Rákóczis in the 16th century and it is currently used as the local primary school.

Exit Felsővadász along Hunyadi Street. The paved road changes into a dirt track that crosse fields and enter the woods. You will enter the village of Nyésta from the north along Fő Street. Turn left at the church and exit the village following a dirt track crossing the fields. The trail enters the woods again. At the top of the hill the trail winds right and soon takes a path on the left. After crossing a meadow and a shelterbelt you will spot the next village, Abaújszolnok (stamper on the fence of a private home at 4 Rákóczi Street).

Past the village the trail passes a long stretch of ploughland and crosses a scrubland. In a young grove it bends left and crosses a meadow to arrive at the road to Baktakék. Turn right and in 800 meters turn left to skirt Ilkaháza and then enter Baktakék (a short detour for the stamper in the pub/grocery store in Rákóczi Street).

Past the village the trail crosses fields and turns left to start a mild descent to Tóbiás-tanya. Along the access road of the farm you will reach the road to Fancsal. After keeping to the paved road for a while the trail makes a shortcut to reach Fancsal (stamper in Tornyos Pub and on the fence of a private home just opposite). The trail exits the village through a fruit garden and crosses a hump towards Abaújdevecse. Cross the village and Road 3 to arrive at Encs and then Gibárt (stamper at the industrial monument of hydropower plant on the fence).

Cross the bridge over Hernád river and hike uphill along the road. Past the village, in a hairpin turn left onto the dirt track and head northeast. Hike to Alsócéce (stamper on the fence at 4 Petőfi Street and with a short detour at Aba Restaurant). The trail turns east in the village and crosses fields arrow straight to arrive at the train stop of Boldogkőváraljára (stamping location). In the village the Blue L (KL) spur trail guides you to the medieval castle on the andesite tuff hill of Bodó-kő (stamper at the entrance) where exploring Zemplén Mountains begins. 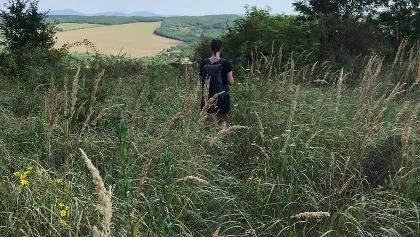