Leaving Old Bakony behind the region shows different faces. On the outskirts of Bakonynána you will explore the picturesque gorge of Római-fürdő (Roman Bath) then climb across a working woodland to Tési-fennsík (Tési Plateau). The small karst plateau has an extensive cavern underneath and its surface is an excellent location for leveraging wind energy as two old windmills demonstrate it.

The trail descends from Tés to the legendary gorge of Burok-völgy (Burok Valley). On the outskirts of Bakonykúti you will encounter spacious treeless hills with no or just a little shade to enjoy on a hot summer’s day.

Next you will arrive at the reservoir of Fehérvárcsurgó and the park of Károlyi Castle. Finally, Bakony says farewell with the scenic valley of Gaja Creek to arrive at Bodajk along a disused ski slope with a view over Vértes, the next mountain to explore.

Take the paved road from Zirc to Nagyesztergár. In the valley past the village it is not only the hot weather but the invasion of insects also poses a challenge to hikers.  The trail soon leaves the paved road and continues among pastures and fields. Gaja Creek, which accompanies hikers many times along this section of the trail, is the most abundant flow of water in East Bakony. It used to feed large wetlands around Székesfehérvár forming a natural barrier against invaders.

After a lengthy hike in the bushes and crossing the creek more times the trail climb up to a hill and arrive at Bakonynána on a paved road (stamper at the junction on the utility pole).

The trail continues along a gravel road and past the former sawmill enters the woods paralleling the creek. You will soon arrive at a picnic spot at the junction of Római-fürdő. The gorge boasts a stunning view here with a tiered waterfall of Gaja Creek. A spur trail leads to the famous outlaw Savanyó Jóska’s cave, one of the famous outlaw’s hideout in the side of the rock.

The trail continues along the valley and crosses a spacious meadow. At the roadside the chapel of the holy well hides, which used to be revered as miraculous waters. The trail enters Jásd where two stampers are placed (at the food store and the pub).

Continue along Patak Street. The trail crosses Gaja Creek and begins an ascent to Tési Plateau on a largely deforested slope. It is a daunting to see the empty slopes without the once splendid beech grove. It takes a short detour to visit Széchenyi Zsigmond Lookout Tower. The trail enters Tés along the main street where the windmills and the smithy are worth the visit. The plateau is quite windy therefore this advantage was taken when 4 windmills were built in the village over the 19th and early 20th century. Two of them are still standing and one is open for visitors. Having 6 blades instead of the usual 4 as well as wooden cover on the blades instead of sailcloth makes them unique in Europe. Recently, the idea of erecting modern windmills was raised, however, the idea was dropped due to environmental considerations.

The top layer of the small plateau is loess covering a limestone bedrock with an extensive cavern system. That is why Alba Regia Cave Research Group established the Cave Research Station of Csőszpuszta here (stamping location).

After stamping return to the Blue (K) Trail and continue to Hamuház (Ash House). Pearl ash produced here from local beech wood was used for glass making. The trail traverses along Tűzköves-árok and leads to the edge of a clear-cut where you can spot Vértes Mountains in the distance. The trail descends to Kisgyón passing by a forest shrine and arrives at Kisgyón Természetbarát-telep (Hikers’ Site). There are two stampers for Kisgyón. One is at Gyöngyvirág hikers’ lodge (a detour of 50 m) and another further on the trail at a junction with a Blue Trail Information Board.

The trail continues over mild slopes. Reaching the edge of the forest you will encounter another face of Bakony Mountains. The trail traverses a landscape with treeless rolling hills along sunlit dirt tracks. You will soon reach the rim of Burok Valley. The steep pine covered valley is a part of the Forest Reserve Program and left intact. The Red (P) trail running in the deep is hard to access due to natural obstacles but it is worth the effort. The stamper in Bakonykúti is placed outside the Mayor’s Office on a utility pole.

Climb to the plateau above the village and pass a farm. The trail continues in a mostly treeless terrain. After a short hike in the woods you will arrive at Rákhegy and the reservoir of Fehérvárcsurgó. Here the trail turns towards the park of Károlyi Castle (check the stamper at Becsali Pub).

The trail curls east around the lake and reaches Gaja-szurdok (Gaja Gorge) on the rim of Bakony. It is a popular tourist destination with a varied landscape and numerous picnic spots. At the lower part the creek was dammed to form a pond while further downstream slow and fast flow parts alternate. The trail leads along meadows and cliffs crossing the creek more times to finally wind up to the top of a hill near Bodajk. Where the trail bends sharply left take the spur trail to the right to Károly lookout tower and you can have a view over the gorge you have just hiked through.

The trail descends along a disused ski slope to Bodajk. While hiking downhill the view of Vértes Mountains over the Basin of Mór unfolds in the distance. There is a stamper placed at the ski lodge, another in Fenyő Pub in the village and a third one at Bodajk-Csókakő train stop on a utility pole. 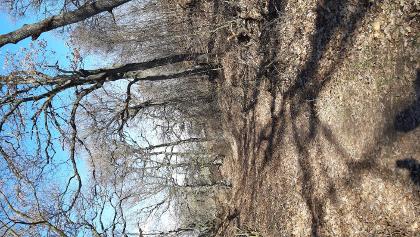 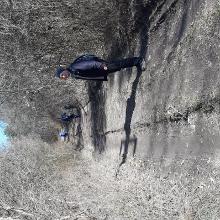 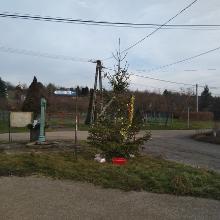 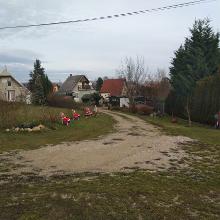