Looking at Bükk from a distance we can see a long stretching mountain rising high over its surroundings with a nearly flat plateau. There is no use searching for peaks as the mountain culminates in a slightly rolling plateau. The most typical constituent of the varied local bedrock is limestone making up a minor and a major plateau in the mountains. Limestone is resistant but easily solves in water draining rainwater into a network of caverns and finally into springs at the bottom of hills. As a result, Bükk plateau is abundant in caverns and ponors.

Limestone, however, presents a spectacular range of formations above ground as well. On the southern edge of Nagy-fennsík (Great Plateau) white cliffs bearing the name “-kő” (e.g. Őr-kő, Pes-kő, Tar-kő, Három-kő) are rock walls that previously lost their underlying slate support by erosion and collapsed. Rising above their surroundings they boast a stunningly extensive mountain view. As the mountain borders the Great Plain in the south and hills in the north without a gradual transition like  wall, it is made up by  several inner pockets of valleys and ridges.

Most picturesque part of Bükk is Bükk-fennsík (Bükk Plateau), aka “Giants’ Table” having more than 50 peaks over 900 meters. Its elevated location results in a relatively chilly and rainy climate. The northern side features steep and narrow gorges presenting a range of karst formations, such as the cascades of Szalajka-völgy near Szilvásvárad or the limestone ribs on the slope of Leány-völgy (lookout point on the drive). Southern Bükk is characterized by peaks of 500-700 meters surrounded by a network of creeks running over slate rocks and diving into gaps of limestone bedrock.

Closed forests of Bükk Plateau are scattered by sweet dolines and meadows. Dolines, that is bowl-like depressions in the ground caused by the dissolution of limestone have a special microclimate trapping cold air at a temperature near zero degrees even in summers.

Several hikers’ lodge and even cave lodges are available throughout the plateau to stay overnight deep in the wilderness.

The Blue Trail traverses volcanic peaks around Szarvaskő to enter the plateau and take you inside passing a series of “-kő” peaks. From Bánkút it descends to the northern slopes and passes a beautiful reservoir in Upponyi Mountains. With a few occasions to look back on Bükk you will cross lower hills to arrive at Putnok.

No access to trailside water on Bükk Plateau except Bánkút. Make sure to have sufficient drinking water supply.

Szarvaskő was built in a narrow alley of dark basaltic pillows formed by submarine volcanic activity. This rock formation occurs where lava is extruded under water and cools down very quickly contacting cold water. The trail climbs near the peak so it is worth a few meters’ detour to visit the lookout point. Although nearly nothing is left of the castle, the view over the village and the valley will compensate you for the effort. The castle was abandoned as the castle of Eger fell into the hands of the Turkish but it remained in use until the early-18th century.

As you arrive at the other side the landscape is completed by the winding road and the railroad disappearing in a tunnel resembling model train scenery with Mátra in the distance. The trail follows a low ridge towards the plateau. Past a few kilometers you will descend into Rocska-völgy . Before the pass of Szarvaskő was blasted accessible this is where the road to Bélapátfalva passed by. At a wider part of the valley there is picnic spot near a tiny Baroque style chapel (Gilitka-kápolna) commemorating a bishop of Eger (Bishop Kilit II).

The trail climbs over a ridge to approach Bélapátfalva and arrives at Telekessy-üdülő. The former seminary today serves as a hostel (stamper on the old tree at the steps and at the entrance).

The trail enters the outskirts of Bélapátfalva at the bottom of Bél-kő. The huge mine pit is a monument of irresponsible human activity regardless of impacts on nature. The mine used to serve the local cement plant, which has been closed down by now.

You will soon arrive at the Cistercian abbey of Bélháromkút. Its construction was interrupted by the Mongol Invasion so the original late Romanesque style was complemented with Gothic features. In the early-13th century Cistercian monks moved here from Pilis and began constructing a church and a monastery. The latter one was set on fire by the army of King Ladislaus IV at the end of the century. Although it was restored, later it was abandoned and changed hands several times. Over the next 200 years it fell into decay with occasional restoration works but its complete restoration began only in the 18th century in Baroque style.

Passing the pond of the former cement plant the view is complemented by the blasted top of Bél-kő. Make sure to get some water at the trailside well as that is the last opportunity until Bánkút. The trail leaves the paved road and ascends along Lak-völgy in a dense forest. Following switchbacks continue along Horotna-völgy with WW2 war graves.

The next ascent shows some rock outcrops of limestone. At a junction turn right to skirt Őr-kő. From the next junction you can make a short detour to the lookout point of Bél-kő (15-20 min.). The trail crosses Zöld-rét and arrives at the plateau with the steep cliff of Őr-kő on the left.

Proceed to Őr-kő rét and make a short detour to the peak. It offers a splendid view over the plateau and neighboring peaks.

Continue along the limestone pavement. Pass the spacious meadow on the left (Korcsmáros-rét) to arrive at Pes-kő-kapu. The trail traverses the slope of Pes-kő. The peak has a protected status and it is not allowed to climb. Soon the trail begins an ascent on a slope and arrives at a door in the rock. This is cave lodge of Cserepeskő. Get your stamp or you may even stay overnight.

The trail continues to the eastern slope of Cserepes-kő crossing a clear-cut offering a great view over the vast forest.

Proceed along the trail and enter the forest where it bends sharply left. Turning right would take you to the peak of Vörös-kő, which provides a view over the steep cliffs from an alternative direction. The trail ascends along a picturesque valley and turns right to skirt Őserdő (Ancient Forest). The forest on the left is a part of the forest reserve program to preserve and observe natural habitat. Forestry work was stopped around 150 years ago. Only native trees live here and even fallen trees remain making an entry for sunshine in the canopy thereby promoting underbrush vegetation.

Past a few turns the trail begins a steep ascent to Tar-kő, the highest natural lookout point in Bükk. Although the Blue Trail avoids the peak itself (950 m), make a detour there along the Blue▲ (K▲) trail. The peak offers a vista over the whole southern Bükk. It is easy to identify Hór Valley (Hór-völgy) with the peak of Ódorvár at the end, Kőlyuk-Galya and Nagy-Eged near Eger in the west. The other “-kő” peaks neighboring Tar-kő are also visible. Undoubtedly, this is one of the widest angle view in Bükk Mountains.

The trail descends to Keskeny-rét (Narrow Meadow) but it is worth making a detour to the easternmost “-kő” called Három-kő for another great view from its grassy top. Cross the meadow to arrive at Zsidó-rét.

Zsidó-rét, just like many other meadows in the mountains, is a result of clear-cutting that has not been reclaimed by trees due to mowing, grazing and thin top soil. Today it is a protected area of the national park. The meadow is scattered by dolines and scrubs being a habitat for several rare species and featuring one of the largest dolines called Mohos-töbör.

Past the meadow the trail continues along a paved road in the woods and soon passes Kis-Sár-völgy and turns left t the end of Mély-Sár-völgy. Hike along the narrow clearing and cross a pine grove to arrive at Faktor-rét, where several hiking trails to Bánkút converge. You will be traversing a series of meadows of the northern plateau, e.g. the protected and closed Ablakos-kő-völgy and pass the entrance to Diabase Cave (153 meters deep) named after a wrong identification of porphyry.

The trail enters Bánkút on a paved road. The area with two hikers’ lodges is the ski center of Bükk Mountains (stamper at Fehér Sas restaurant/hostel and at “Síház” lodge”).

Make a detour to Bálvány peak with Petőfi lookout tower along Blue ▲ (K▲). Not only a large part of North Hungary but the High and Low Tatras are visible from the top also.

The trail begins to descend from Bánkút and crosses the road to Mályinka. Keep descending through the dark beech forest of Ördög-oldal. In a saddle take the ridgeline to the left and cross the remnants of an earth fort. Right before the rock wall of Kisvár the Blue Trail turns right and descends to Vár-völgy but it is worth making a detour further uphill to Dédes-vár (597 m) to enjoy the view. The story of the castle ended sadly. After a long and heroic defensive fight during the siege by the Turkish, Hungarian defenders piled up all their remaining gunpowder and left a long fuse to have enough time to escape during the night. The explosion killed 400 Turkish soldiers and their general took a revenge by demolishing the castle completely.

The trail steeply descends into a valley. Hike along the valley and climb over the hill to arrive on the outskirts of Mályinka. The lookout tower near the village affords a view over the surrounding hills. Another attraction of the village is a belfry, which serves the local Reformist church (at the time it was forbidden to build a tower for Reformist churches). The stamper is placed in front of Sanyi kocsma (Sanyi’s Pub).

The trail continues on a paved track to Dédestapolcsány. Past the village you will arrive at a picturesque pond, the Y-shaped reservoir of Lázbérc. It was established in 1967-68 to provide water supply for the surrounding industrial area and villages. Today it is primarily used as a fishing pond.

The trail follows the lakeside among the hills of Uppony Mountains, which is an older and lower range of hills than Bükk. At the end you will arrive at a pass etched by Csernely Creek along a fault line creating the deepest gorge of the country (Upponyi-szoros). As the road also passes through it is only the walls that preserved the original environment. In Uppony check the stamper at BB Pub with short detour on Blue L (KL) or in Szabadság telep Street along the trail (on a Blue Trail pole).

Past the village the trail enters the forest and crosses a pine grove to climb to the saddle behind Kalica-tető. It is well-worth the effort to make a detour to the peak to enjoy the view over the reservoir, Bükk plateau and Uppony pass.

Continue through the woods towards the black rocks of Három-kő. Following a steep climb you will arrive at the peak, which has a microclimate habitat as dark andesite absorbs sunlight and releases heat to the environment.

The trail turns downward to round the basin of Uppony along the ridgeline. Turn sharply right and pass a foresters’ lodge to continue along Határ-völgy towards Putnok. The trail enters the town along a paved road with the hills of Borsod county and crosses Sajó river to arrive at the train station (stamper).

Things to Bring if Staying in a Mountain Hut 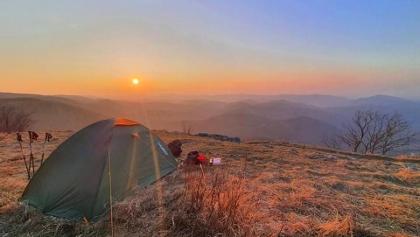 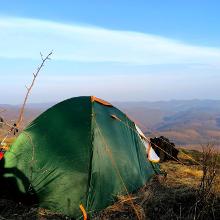 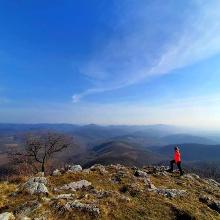 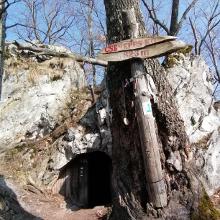