Responsible for this content
Magyar Természetjáró Szövetség Verified partner  Explorers Choice
The 24th section of the Blue Trail takes you to region of a unique character. After traversing grassy rolling hills the trail enters a karst plateau with rock outcrops and dolines. The insight into the underground world of karst will make your hike a memorable experience.
moderate
Distance 62.3 km
Duration18:30 h
Ascent1,700 m
Descent1,690 m

Aggtelek Karst Hills is a small range of low hills near the Slovakian border with a maximum height of 604 meters (Fertős-tető) forming the Karst of Gömör-Torna region together with Slovak Karst on the other side of the state border. The area is abundant with karst phenomena, which may explain why so many terms originate in the local dialect.

Aggtelek Karst has two distinctive parts. The northern part is a bare karst region with bumpy plateaus and deep valleys. Slopes with calcareous shrubland, rock outcrops and steep cliffs are common here. The southern side avoided by the Blue Trail is a covered karst region with an aquitard layer on the top. Waters from this region dive underground at the border of the two areas feeding an extensive cavern system.

The world heritage site Baradla-Domica Cavern System has a total length of 25 km with impressive dripstone formations and good tourist facilities provide an insight into the underground world. As the result of water dissolving limestone the cavern itself is an underground valley of a river. As layers gradually elevated underground creeks etched new tunnels creating a multi-level cavern, sometimes elevated to the surface.

The elevation of horsts resulted in plateaus of various heights and wide grabens, e.g. the plateau above Jósvafő with dolines and the hucul stud or the dry ditch of Szelce-völgy. In Ménes-völgy a chilly karst spring awaits hikers in a gorge-like environment. In general, the landscape of Aggtelek Hills is characterized by a mixture of chilly creeks, rolling plateaus, karren fields and sweet meadows.

The Blue Trail sets off from Putnok, crosses the wooded hills of Borsod and passes the bog of Mohos Ponds to arrive at the grassy topped hills. Traversing the hills the trail passes tiny villages and offers great views. Past Zádorfalva you will enter the woods to approach Aggtelek and the karst. After crossing the calcareous grassland and shrubland, the trail continues through a forest to Jósvafő. Past the village a lengthy hike through the forest begins passing a picturesque meadow on the plateau of Jósvafő with a series of dolines and the hucul stud. The trail descends to Szelcepuszta in Ménes-völgy and then climbs to the plateau of Alsó-hegy with wide meadows and the monument of the ill-fated village Deren. A short but steep ascent will take you to Szádvár castle to enjoy the most beautiful view of the mountain and finally, winding among dolines the section ends at the edge of Bódva valley and the border of Cserehát.

After stamping leave the station and head north towards the main square (“Serényi László tér”). Turn right at the church towards Kelemér.  Right next to the church stands Serényi Castle and its huge park. Past the town the trail enters the woods. It keeps to the paved road and later parallels it. Past a sweet fishing pond it arrives at a picnic spot at Pálma Spring named after a local earl’s (Earl Béla Serényi) wife. Here the trail begins an ascent along a short side hollow.

On the other side of the ridge ascend through the you forest and right before a clear-cut take a sharp turn to the right to reach the bog of Kis-Mohos Pond and Nagy-Mohos-Pond. The beds of the two bogs were formed by a slide 15 and 25 thousand years ago, respectively. As they originated in the ice age their special climate preserved rare species of plants from that period, too. The open water surface of the bog has been shrinking throughout the last decades as a natural process during its lifecycle.

The trail returns to the road to Kelemér and keeps to it except two shortcuts through the woods. As you arrive at Kelemér you will pass a showroom of the national park (Mohos-ház) and, in the center, Mihány Tompa Museum named after a renowned Hungarian poet born in the village. His pen name was a word play Rém Elek (Alex Bogeyman), which is the name of the village read backward, and it nearly sounds like “rímelek” meaning “I rhyme” (stamper on the fence and in the caretaker’s office).

The trail exits Kelemér and continues along the paved road to the dead-end village of Gömörszőlős. The landscape changes to treeless slopes with meadows and pastures, however, livestock has disappeared over the decades. The village has an open air exhibition on traditional farming on the outskirts (stamper at the entrance).

Past Gömörszőlős the trail soon begins to climb a hill while offering a beautiful view back on the valley with the tiny village and a patchwork of pastures and woods.

The trail descends on the other side through dense woods to arrive near Zádorfalva. Follow the small creek towards the village (stamper in the pub in the center).

The lengthy hike to Aggtelek begins on a paved road but soon exits to the left to traverse the foot of a hill. Your hike with a view over the surrounding area soon ends as the trail enters the woods.

Expect no variety over the next few kilometers as the trail traverses oak woods with grassy forest floor and scrublands of clear-cuts. Hike along the ridgeline. You will pass a signature ancient oak called “Ladon’s Tree) and soon reach the state borderline. As the trail begins to parallel the borderline the view towards Slovakia unfolds and you will soon spot the limestone rock of Aggtelek, too. Both the rock and the famous cave is called “Baradla” meaning “rock wall” in Slovakian. As you reach the paved road to Aggtelek (and Slovakia) turn right and hike to the hikers’ lodge (stamper at the reception and the visitor center).

The trail enters the karst mountain and a totally different landscape. Take the stairs at the top of the cliff for the great view over the area that you just passed and the rest of the section ahead. Continue over the hillside and descend to Mész-völgy. A 10 minutes’ detour along the Yellow (S) trail takes you to the pond of Aggtelek in a clogged sinkhole (runs dry in summers).

Past a chain of clearings you will arrive in a charming forest with mossy rocks and dead trees. The trail leads to another valley and past a climb and a karren field it starts to ascend towards Jósvafő. At the junction make a detour along the Green (Z) Trail to visit more attractions of the village and to get the stamper at the ticket office of the cavern.

Exploring Jósvafő is worth a longer stay. The creeks play a uniquely important role in the landscape of the village and they kept their original beauty as following their natural course.  Take a walk around the neat old village and visit the emerald green Tengerszem pond fed by Jósva cold water karst spring.

Pass the entrance of Kossuth Cave and continue on the dirt track along the winding gorge of Tohonya-szurdok. Past a clearing hike steeply uphill to the unforgettable plateau of Jósvafő.

The vast meadow scattered by dolines and surrounded by wooded hills. The only exception is the highest slope as rainfalls eroded top soil off its steep slope and etched hollows in the rock creating a habitat for a less demanding flora. This is a typical landscape of Gömör-Torna Karst area. The grazing hucul stud makes this place even more exotic during warm seasons.

The trail crosses the meadow and enters the woods. Climb to Szőlőhegy (make a short detour along the Yellow (S) trail to a lookout point (search for the petroform of a fire salamander, the mascot of the national park).

The trail traverses hills lining the amusing Szelce-völgy and descends into the valley only at its end to arrive at Szelcepuszta. This is an idyllic accommodation with a hikers’ lodge and a castle hotel. Grazing horses and tame fallow deers welcome us on the wide clearing, which used to be the center of Governor Miklós Horthy’s hunting forest.

The trail descends into Patkós-völgy and continues in Ménes-völgy along Ménes Creek. At a junction turn left and then right to hike uphill in a side hollow through the pine woods. The forest is scattered by meadows as you approach the polje (karst field) of Derenk with the ruins of a village.

The name “polje” derives from Slavic languages literally meaning “field” but it is used internationally for large flat-floored depressions in karstic geological regions. Being endorheic, a polje is the only place on a karst plateau where water is retained making it suitable for settlement. The sites of the houses are signaled by poles and only a decaying barn, the cemetery and the renovated school remained. The school hosts an exhibition on the history of the ill-fated village. It used to be inhabited by Gorals, Slovakians and Hungarians. When establishing the hunting forest for the governor the village stood in the way. This issue was settled in a radical way as inhabitants were relocated and the village was demolished in 1943 (stamper on a Blue Trail information board).

Past Derenk the trail crosses a spacious wet meadow and enters the woods. It soon crosses a logging road to Slovakia.

At the junction the spur trail to the right leads to the ruins of Szádvár (Blue L (KL) and Red L (PL)). Make a detour to visit the lookout point with a view over the region. Explore the ruins of the castle to enjoy the view to various directions.

The trail passes the curved meadow of Tábor-rét and arrives at a gully (Borz-lyuk) where the trail turns left and begins a lengthy ascent. Past the ascent the trail takes a wide forestry road, which traverses the plateau with several dolines all around.  Finally, you will arrive at the decaying hunter’s lodge of Szabó-pallag with a picnic spot and rain shelter next to (stamper on the Blue Trail board).

Past the clearing the trail begins a lengthy descent through a forest reserve. It passes Kis-Vizes Töbör with the entrance of Meteor cave at the bottom. Keep hiking downhill to reach the vlley of Bódva Creek. From a small clearing you can enjoy the view over Bódvaszilas with Esztramos Hill with the mine pit on the top and Szalonnai-hegység in the background. In the distance the range of Zemplén Mountains rises.

As the trail exits the forest the view over the area unfolds with Alsó-hegy on the left stretching far to the east like a wall. Crossing the fields around Bódvaszilas the trail arrives at the village. Take your time to visit the renovated Esterházy-Koós Castle in the center. Follow the Blue ◼ (K◼) to the train station for the stamper (on the fence). Cross the rails and head towards Cserehát.

Help others by being the first to add a review. 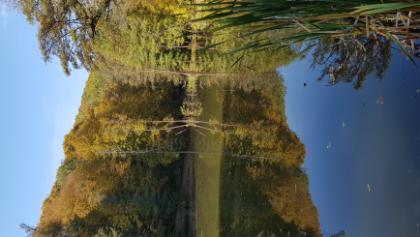 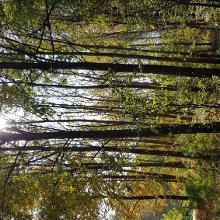 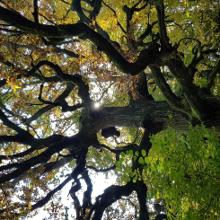 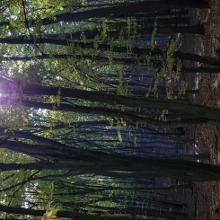