Responsible for this content
Magyar Természetjáró Szövetség Verified partner  Explorers Choice
Írott-kő (Marked Rock), the highest peak of Transdanubia is the western trailhead of the legendary 1166 km long National Blue Trail (Országos Kéktúra, i.e. OKT). It descends through the valleys and peaks of the beautiful Kőszegi-hegység (Kőszeg Mountains) with gurgling creeks and scenic lookouts over the Alps. Then it crosses the flattest part of the whole Trail to reach Rába River at the end of this section.
open
moderate
70.7 km
18:30 h
565 m
1,290 m

The National Blue Trail starts at the western border of the country offering numerous points of interest, natural beauties and experiences to hikers. We may roam in the mountain from lookout to lookout, through valleys with several springs to quench thirst. Starting from Írott-kő this section of the trail descends on densely forested chilly slopes of Kőszeg Mountains to take you down to Kisalföld (Small Plain). The flattest part of the trail prepares you for crossing the Transdanubian Mountains. Numerous attractions in the historic town of Kőszeg encourage visitors to stay for long. Leaving the town set off on a long journey in a flat region with slight elevation change. The trail runs past tiny villages, hidden castles, arboretums, old churches tracing a course along forest paths and clearances or paved roads to take you to Sárvár with a castle to capture and a spa to find rest and realaxation.

Points of Interest with a short detour

The 1166 km long National Blue Trail starts near the peak of Írott-kő, just at the clearing below the lookout tower where the Pál Rockenbauer Southern Transdanubian Trail enters the spruce forest on the right.

The two Írott-kő stampers are placed on the information board at the tower and the rain shelter in the clearing. The lookout tower lying on the borderline provides the country’s largest panoramic view over the Alps. On the Austrian side the easternmost Alpine tundra areas of the Alps rise dominated by the gigantic Schneeberg and Rax plateau, while waving hills of Burgenland are visible nearby. On the Hungarian side the flat Kisalföld (Small Plain) spreads out and in clear weather you can even see Keszthelyi-hegység (Keszthely Mountains) and Bakony Mountains. The peak is located on the edge of the pine forest on the Austrian side of the border and was named for the marked boundary stone that used to indicate estate borders.

The trail starts to descend on the ridge of Írott-kő, on the Hungarian side of the country border. Walking in a mixed forest the trail takes us along the border vista lined by a wind-torn birch grove. This is the only occurrence of such a flora on this side of the Danube, just like peaks over 800 meters. As part of the Iron Curtain zone this part of the mountain had been inaccessible for decades. The low main ridge features tiny outcrops revealing the rocks that constitute the mountain. It is fine foliated slate that mostly makes up the mass of Kőszegi Mountains with scarce occurrences of marble. The trail reaches a forest road through a dark canopy of red pines.

Descend to reach Hörmann-forrás (Hörmann Spring, non-potable water) with an abandoned military quarters being repossessed by nature. Head along the paved forestry road to reach Styrian Houses Forest School on a clearing. The original inhabitants of the buildings in the late 18th century were the first foresters of the mountain with Styrian origin. Today they serve as a hiking hostel. The trail leads along the paved road through a majestic beech forest to Vörös-kereszt (Red Cross), a junction of six forestry roads. Heading to north-east the dirt track narrows to a footpath along the ridge and takes you to a lookout tower at Óház-tető (Old House Peak). It provides a spectacular view over Kőszeg and Kisalföld (Small Plain). Although a lateral ridge partly obstructs the Alpine view to the west, however, some higher peaks and even the lower Hohe Wand Plateau are visible. The trail keeps descending from the lookout to the valley of Hét (vezér)-forrás (Seven (Chieftains’) Springs).

The specially encased spring pours out into a beautiful pool through seven pipes. The stamper is placed at the rain shelter nearby. The trail climbs to Pintér-tető (Cooper’s Peak) on the northern ridge. The narrow shoulder has been cleared so you can turn for one last farewell look at the Alps and hills of Burgenland before heading downhill into the Carpathian Basin.

The trail leads through a mixed forest to Kálvária-templom (Calvary Church) on a hilltop. It provides a beautiful view over Kőszeg beyond the vineyards on the outskirts of town. The route steeply descends along Stations of the Cross to the edge of the town. Down at the bottom you will see a bunker on the right where the Holy Crown of Hungary was hidden for a few days in March, 1945 to save it from war. Approaching the town center the historic character of Kőszeg begins to unfold.

Stampers in downtown Kőszeg are placed in Kék Huszár Restaurant and the Tourinform Office. Following the trail you will leave the town along Ólmodi Street. The dirt track soon reaches the former line of the Iron Curtain with forest lining the trail on your left following the curves of the border. After a straight stretch the trail crosses the control strip of the former border barrier. It was covered with raked sand which made the footprints of defectors easy to notice. A special permit was required to enter beyond the line thus also the Blue Trail used to skirt that zone and enter Kőszeg on the paved road.

The route soon passes an abandoned shooting range and bends left at a Saint Hubertus column shrine. Approaching but not descending into the valley of Ilona Creek the trail traverses a dense pine grove and reaches an open field after a slight descent. After passing a little pond the trail runs parallel to Ablánc Creek in Grádics Grove and takes you to Tömörd.

The stamper is placed at the picnic shelter next to the church.

The trail continues along an old country road following Fenyves Creek but at distance from the creek bed. Follow the trail through the fields and then the lands near Ablánc Creek. Cross the creek to reach Mill Inn of Ablánc with the stamper on the fence. The former mill, which later functioned as a restaurant, has been abandoned for long and was let fall into decay.

Follow the paved road to northeast. Heading right the trail leaves the road and slightly ascends. The broadened path crosses a railway through an underpass and leads across lands and groves to Szeleste where the stamper is placed in Máté Diner and Pub.

The trail crosses the village passing by the park of Festetics Castle and where the main road winds to the right continues straight ahead towards Ölbő-Alsószeleste railway station. Head through the roundabouts and the flyover. The trail turns right just before the level crossing and runs parallel to the rails for around 1 km. A dirt track on the right takes you across a meadow and on the other side of the bushes crosses a field. Following the markers you will follow a sparse colonnade of chestnut trees and skirt the dark pine grove of Lőrinci-erdő.

Straight across Ölbői-Nagy-erdő the trail reaches Road 88. Head to the left. In 200 meters you will come to a junction and continue to the right along a gravel road through Váti-erdő to Bögöt. There are two stamping locations in the village. One is at Coop Store and another at the Mayor’s Office in the electric meter box.

The trail leaves the village along a dirt track and continues through adjoining lands. As it returns to the paved road it crosses the railways twice and soon returns to the woods on the left. It zig-zags along clearances of Tilos-erdő to get back on asphalt again.

You will soon arrive at Csénye. The trail exits the village along a paved road that later joins the road connecting Sárvár and Ikervár. Take a right and you will soon find decaying farm buildings on the left and the Chapel of Újmajor on the right with the Csényeújmajor stamper on the fence. Right before the bridge over Gyöngyös Creek continue to the left along the levee. At the bridge just before reaching the sluice gate head to the left along the dirt track and turn right to continue along the lower levee to enter Sárvár. The next stamper is placed at the entrance of a public toilet in the park near Nádasdy Castle.

Entry point accessible on foot only.

Hiking boots recommended in Kőszeg Mountains and comfortable shoes for the flat area. Be prepared for rains. Make sure to have sufficient water, especially between Kőszeg and Sárvár as no springs are available. Use Természetjáró app to navigate. 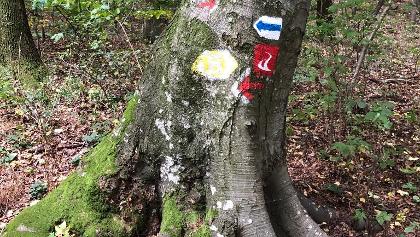 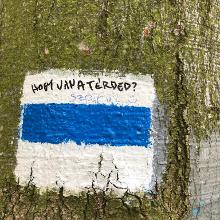 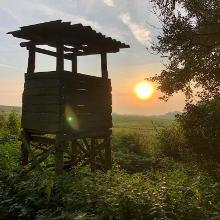 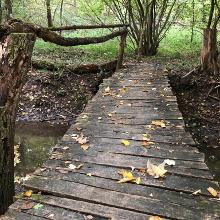