Hiking through rolling hills and tiny villages East Cserhát one would hardly imagine that this landscape was formed by intensive volcanic activity. We may spot volcanic traces in various places, such as the stones of Hollókő Castle or in the foundation of houses in the fabulous Ófalu (Old Village), the solid lava flow at Szanda or the rocky paths of Tepke Ridge.

Natural beauties together with traditional, socialist and post-socialist architecture create a unique mixture to take you on a strange travel back in time.

The trail takes you up to the hill of Szanda with castle ruins on the top and spectacular geological formations including the unique andesite slide, that is a concave curvilinear columnar jointed rock. The view from the top clearly shows the typical Cserhát landscape with wooded low hills and basins with fields, pastures and small villages.

Ascending to Szandváralja and Terény the trail passes a row of beautiful ‘palóc’ houses and crossses Cserhátsurány to enter the largest forest of the area. Passing Nógrádsipek the trail ascends in a valley to volcanic peaks and makes a short detour for the lookout on Dobogó-tető with a view over mountains in Slovakia and Mátra Mountains in the next section of the Blue Trail.

Next the trail arrives in Hollókő with the castle and the UNSECO World Heritage Old Village (Ófalu). Passing two other villages the trail ascends to Tepke, which geologically belongs to Mátra. Descending from the hill the mass of Mátra is more and more inviting. To accept this invitation you will need to proceed through some other hills and villages of Cserhát and arrive at Mátraverebély crossing Zagyva river, the natural border between the two regions.

The trail exits Becske and ascends through the woods. Hiking downhill you will arrive at an open field with a view over Szanda, the next hill to climb on the left and Berceli-hegy with a mine on the right. Hike uphill towards the peak crossing the paved track to the abandoned mine. At the saddle take the Blue L (KL) spur trail to the castle ruins on the peak. Before reaching the ruins take a pause to look at a geological rarity on the other side of the barrier. This curvilinear columnar jointed rock formation is usually typical of basalt and not andesite. Melted magma seeped into the cracks of overlying sedimentary rock and solidified. During the cooling process it has shrunk and gained its current shape. Erosive forces eliminated its environment and mining has brought it to the surface.

There is only little left of the castle. Only a piece of wall from the former keep is rising on the peak. The view, however, is stunning. The trail begins an ascent towards Szandaváralja and soon exits the forest to traverse wide pastures on the slope and enter the village (stamper on a utility pole near a Blue Trail board in the village center).

The trail crosses a partly wooded hill to reach Terény, where nearly 80 houses represent traditional rural architecture. Hike across the next hill to Cserhátsurány. The trail exits the village ascending along an old road to Szécsény with a view over Herencsény stretching to multiple directions as valleys allow. The trail enters Nógrádsipek among decaying farm buildings and leaves the village southeast along a farming road.

Although hills of Cserhát are barely above 500 meters, creeks of a contiguous forest area may flood at times of heavy rainfall. The flood control reservoirs that the trail passes serve to prevent these incidents. The trail ascends in a narrowing valley with andesite rocks as forerunners of volcanic peaks ahead. Make a detour (800 m) along the Blue ● (K●) spur trail to the right to Dobos-kút, which is not only a reliable and drinkable water source but a great bivouac shelter also. Make another detour from the Dobogó-nyereg to the right along Yellow (S) and Yellow▲ ( S▲) to the geodesic tower for the most beautiful 360 degree view over the area.

The trail begins an ascent to Hollókő through a greasy beech grove. Exiting the forest you will reach Sós-puszta and a typical Cserhát landscape unfolds with low wooded hills, pastures and fields reaching high on the slopes. Walk to the dirt track running along the upper edge of the meadow to enjoy the view to the north. The trail leads back in the woods and soon arrive at the old village (Ófalu) of Hollókő. This part of the village is a UN World Heritage Site built in 1909 past a fire devastating the settlement. A stamper is placed at the café in Kossuth Street and another is in Szabó Pub.

Take your time to visit the Castle of Hollókő. The trail ascends into the beautiful valley of Szekerce Creek affording a view over your next destination, Tepke hill. The path leaves the narrowing valley and ascends on the side of the hill. Before reaching Felsőtold cross the meadows and enter Alsótold. These two villages have probably the most idyllic location in Cserhát.

The Blue Trail turns into Alsó-szurdok and arrives at Bableves csárda (bean soup and stamper in one place). From here onwards the trail traverses a more mountainous landscape climbing higher volcanic peaks as geologically this area belongs to Mátra, the mountain with the highest peak in Hungary.

The trail crosses a field on a small plateau before entering the forest again and beginning a steep ascent to the peak of Tepke (567). The tower affords a wonderful view over the whole Cserhát and even the huge mass of Börzsöny. On the other side Mátra and its peaks, the destinations of the next sections appear. More to the north it is Bükk with its flat top, Karancs, and in clear weather, mountains of Slovakia are also visible.

Past the lookout tower the trail begins an ascent along the ridgeline rolling from peak to peak over a rocky terrain with occasional views. Approaching Nagybárkány it is only the church tower visible with Mátra in the background (stamper in a store at 48 Petőfi Street).

The trail exits the village and climbs a grassy hill again. At the end of a meadow head right along the paved road to Sámsonháza. Passing an abandoned mine you can observe how volcanic activities of different periods formed multiple layers displaying various colors, which obtained a white limestone cover as sediment of the ancient seas.

Leaving Sámsonháza say farewell to tiny villages of Cserhát and cross a creek valley and then a hill to reach the shrine of Szentkút (Holy Well). Legend has it that as King Saint Ladislaus was fleeing from his enemies, he arrived at a chasm. Survival was nearly hopeless from here, but he managed to leap over it with his horse, and that was the first time a spring appeared here. Besides the pilgrimage place it is worth exploring tiny gorges of Szent László-hasadék and Remete barlang (Hermit Cave) etched into volcanic tuff. After a short hike in the woods you will enter Mátraverebély, where the trail crosses Zagyva river and enters the region of Mátra Mountains (stamper in store in Vasút Street, in Móricz Pub, and on a tree near the level crossing lights). 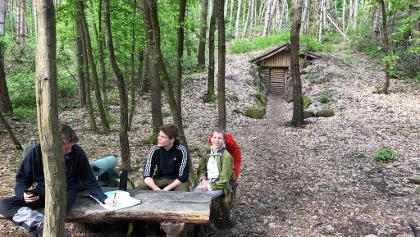