Responsible for this content
Magyar Természetjáró Szövetség Verified partner  Explorers Choice
Hiking along the 6th section you will discover a chain of lookouts with various views over Balaton and buttes of Tapolca Basin. As the trail leaves Balaton behind the landscape changes. In summers, holiday makers invade Káli Basin to detach from the hectic beach and enjoy tastes, smells and drinks in those peaceful tiny villages. Join them.
open
moderate
Distance 48.1 km
Duration14:10 h
Ascent1,550 m
Descent1,410 m

Towering over the bustling lakeside Badacsony boasts an unmatched view over the olive green water. The first half of the section provides an opportunity to climb further buttes, brothers of Badacsony, such as Gulács and Csobánc granting memorable memories of this tiring hike.

You will encounter basalt in various practical uses also especially as building material for local buildings. It was mined in various places in the area, e.g. in Hajagos where the trail skirts mine pits to arrive at Káli Basin, the “Hungarian Tuscany”. The trail will take you to signature rock formations of the area called “rock see” crossing tiny villages of unmatched ambience. Climbing one more hill you will visit Eötvös Károly lookout tower to see Káli Basin from above, too.

Leaving the volcanic landscape behind the trail changes to a woody terrain and approaches hills of Bakony Mountains, such as Kab-hegy with a TV tower on the top.

From the level crossing near Badacsonytördemic–Szigliget train station follow the Blue (K) markers along Zöldfa Street. From Rodostó hikers’ lodge at the bottom of Badacsony climb the 464 Stairs of Refugees to the plateau. The Blue (K) markers run along the edge of the plateau while Blue▲(K▲)  spur trail leads to the lookout of Tördemic with a view of Tapolca Basin.

Past a few hundred meters you will arrive at the clearing of Ranolder Cross. This is where we may recognize the robust character of the hill towering over a vast mass of water. Our next stop is at Egry József lookout made of basalt stones. The trail continues along a clearance across the plateau but soon detours and makes a short descent to Hertelendy memorial stone named after the pioneer of Balaton navigation. Here you can have a view over the Bay of Tomaj. The trail then returns to the plateau. At a junction Blue ▲ (K▲) markers lead to Kisfaludy lookout tower at the highest point of Badacsony.

The hike so far and various views over the slopes and the surrounding area clearly demonstrate how a typical butte of Balaton Uplands plays multiple functions with a harmony of geological heritage and land use. While holiday makers enjoy the lakeside south-facing volcanic slopes of Badacsony grow precious grapes further ripened by sunshine reflected by the lake. Building here are mostly cellars, wine press houses and holiday houses. Although the eastern slope used to be a site for mining basalt for decades higher up the hill where organ pipes rise and basalt debris fall there are only scarce traces of human activity.

The trail starts to descend on the northern slope to benches near Köböl-kút and traverses vineyards. Cross the road connecting Badacsonytomaj and Nemesgulács to approach Gulács. The trail begins a level traverse on the slope of the hill then descends. A steep spur trail to the left (Blue ▲ (K▲)) takes you to the summit with an obstructed view over the area. As opposed to Badacsony the conic hill with its pointed peak is not a result of lava flow but that of magma stuck in the vent. This means steep ascent and sweat for poor hikers. Continue through the woods to reach the paved road to Káptalantóti (stamper in Horváth kert Pub).

The trail leaves the village behind along a paved road towards Tapolca (Csobánc Street). At the junction with a white roadside cross turn right and then left onto a dirt track. Proceed among the vineyards to the foot of Csobánc Hill where the trail steeply ascends to the castle ruins on the peak (stamping location). Besides the ruins the plateau also offers a view over the Káli and Tapolca Basins with the familiar buttes and, of course, the lake.

Descend to the road to Díszel. The trail skirts Hajagos Hill to the north and traverses through vineyards. Crossing a young grove and passing a disused basalt mine pit the trail begins a level path. Past a wooded area it arrives at a pasture. Cross the pasture to reach the road to Mindszentkálla. At a vineyard turn sharply left onto a dirt track towards the woods.

It leads to the most famous geological formation of Káli Basin called “kőtenger” (Sea of Stones). The strange quartz sandstone rocks are remnants of the ancient Pannon Sea. Traverse along the ridge of the hill and descend to the outskirts of Szentbékkálla. Follow the markers to the palace ruins of Veléte Hill, which are remnants of the bishop’s palace. The stamper is placed at the food store in the village.

Leaving the village the trail winds among vineyards to the spring of Öreg-hegy (Old Hill, drinking water). Head northwest along the narrow paved road and the trail starts to switchback towards the plateau of Fekete-hegy (Black Hill) with Eötvös lookout tower on the southern edge. This is the last wide angle view over the lake before leaving Balaton Uplands.

Follow the ridgeline to reach a minor saddle where a narrow dirt track starts to wind near tiny ponds. They are formed as the basalt cap of the hill prevents rainwater from soaking into the ground. The trail steeply descends along Vaskapu Valley and continues among vineyards again with a view of Káli Basin on the right. You will soon reach Balatonhenye with a stamper at the pub.

Past the village the trail skirts an abandoned farm building and continues along a dirt track. The transition from the Mediterranean character of Balaton Uplands to that of the densely forested chilly Bakony Mountains begins here. Although Bakony is a long walk away the change in the landscape is easy to perceive. It is time to say farewell to Balaton.

Traversing groves a winding gravel road leads to Forest School of Balaton Uplands with Csicsói erdészház (Forester’s Lodge of Csicsó, stamping location ). The same gravel road will take you to the road connecting Nagyvázsony and Vigántpetend. In 350 meters head left into the woods.

Past Kinizsi Spring the trail leaves the forest behind. Hiking in a funnel-shaped clearance you will see Kab-hegy ahead, the highest peak of Bakony Mountains. The trail continues along a narrow path in the woods and soon arrives at the well of Szent Mihály-kolostor (St. Michael Cloister). Head right to the ruins of the cloister founded by the legendary general Pál Kinizsi. Return to the Blue (K) trail to proceed to Nagyvázsony welcoming visitors with the distinctive view of the keep of Kinizsi Castle built in the 15th century. One of the stampers is placed at the ticket office of the castle. The other one takes a short detour to Kinizsi Pub. 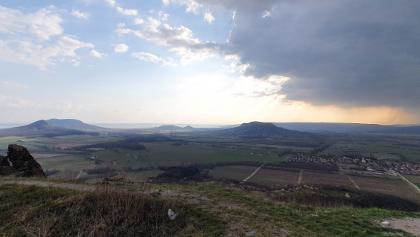 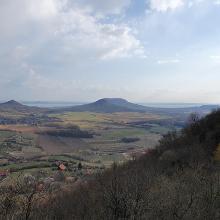 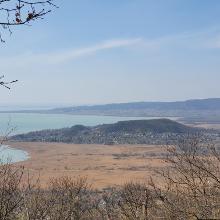 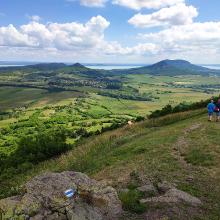