The dragon and the organ pipes

Head north-west from the bus stop along the Green (Z) trail in Kossuth Street. Turn left past the school and proceed through the vineyards to reach the basalt columns. After take a short detour along the Green L (ZL) on the right to visit the oldest chapel of the hill (Szent Kereszt Kápolna, Holy Cross Chapel). The construction of the chapel was commissioned in 1244 by abbot Solomon as in the 13th century, Kisapáti belonged to the Benedictine Archabbey of Pannonhalma. The altar and some fresco fragments have their origin in the late medieval times. Szent György-hegy is home to 5 more chapels and a ruined chapel too.

There is great view over Csobánc from the building and the vista begins to unfold further along the Green (Z) trail.

It is easy to spot a special rock formation of Szent György-hegy called Vércse-szirt (Kestrel Rock), which was formed by a rockslide. As the basalt hill sits on softer sedimentary bedrock, water erosion caused loss of support along the edge (and underneath also by oozing through cracks) of the basalt cap. Additionally, wet clay layers functioned as “greased slopes”. As a result, the huge basalt mess slid in winter of 1757 burying 24 wine press houses (no casualties, fortunately).

The trail slaloms among atmospheric wine cellars and forest patches before it reaches Kaán Károly hikers’ lodge just below the basalt columns. It was built in 1934 by volunteers and it was the first one in the Balaton Uplands open all year round. Take your time to check the 32-metre long Sárkány-barlang (Dragon’s Cave) and Kis-Sárkány-barlang (Small Dragon’s Cave). They are icy talus caves, that is they are maize-like open spaces in the scree pile formed by collapsed basalt columns. That is why they are pseudocaves, as they were not formed in solid rock. Ice formation takes place when dry surface air in winter enters the moisture-saturated cave and vapour freezes. Then evaporation from the large surface of the cave also results in a cooling effect due to the latent heat of the evaporation. These processes preserve the ice cover in the cave nearly all year round.

The legend has it that once upon a time a dragon came to Szent György-hegy and settled in a cave. The beast terrified the locals and demanded a pretty girl at every summer solstice. The locals had no choice but to obey. Once the dragon got badly ill and the girl sent to it healed it with the help of a herbwife. In return, the dragon stopped bullying the village and offered protection. For example, when a wolf was decimating flocks of local sheep, one morning the villagers found the dead wolf just outside the church. When the dragon died, its last breath froze the air in the cave forever. In another version of the story, the dragon and its family were slaughtered by Saint George.

The Blue (K) trail leads to the most famous attraction of the hill on steep stairs. It passes a huge pile of scree resembling collapsed coin stacks. The latest major collapse took place in winter of 1999/2000, when two "stone bags” fell.

From the bottom of the hill up to this point the trail traversed over sedimentary rock of the Pannonian Sea covered with a layer of pyroclastic deposit during the initial phase of volcanism. However, this layer is not exposed as it is mostly shielded by scree. 4 million years ago, this tuff ring was filled with lava from effusive eruptions creating a huge lava lake. It left behind a thick layer of basalt. Its lower layer of coarse tuff served as the basis for the basalt columns. Past lava flows a long hiatus in volcanic activity followed. While cooling, the rock mass shrank causing tension inside. Vertical tension could be accommodated by the elastic molten rock beneath but horizontal tension could not be relieved and so the basalt fractured into vertically standing columns, predominantly hexagonal in cross-section. Later post-volcanic heat changes and water took over the main role. Water freezing in cracks as well as changes in temperature further contributed to an extensive fracture network. These cracks kept growing and reached deeper and deeper, forming even small cavities. This is how the organ pipes of Szent György-hegy were born. During the cooling process, further explosive eruptions produced a yellowish upper tuff layer on the southern side of the plateau. Finally, lava rich in gases emerged creating the basalt cap of the hill.

Up to the top

The trail will take you above the columns where take a short detour to the right and enjoy the view over this special rock formation and more distant landmarks. Besides nearby buttes bordering Káli Basin you can see Kab-hegy in Bakony Mountains with its signature TV tower, the stand-alone peak of Somló in the distance, the castle hill of Sümeg, the town of Tapolca, the largest settlement nearby and Haláp Hill just behind the town, truncated by mining.

Proceed along the Blue (K) trail to a rain shelter named after poet Béla Kasza, where change to the Blue ▲ (K▲) spur trail to get to the top of the hill. Until this point, the trails crossed a secondary forest (a forest that has re-grown after timber harvest), but here begins a shrubland mostly with blackthorn, hawthorn and dog rose that have overgrown a former grazing land. While hiking uphill you will have more opportunities to enjoy the view but it is the lookout point on the top that rewards you with the greatest view after this steep ascent.

Descending on the slope

Return to the rain shelter and continue to the right along the Blue (K) trail just above Vércse-szirt (Kestrel Rock). You will pass more outcrops showing upper pyroclastic deposits from the third phase of volcanism. This area used to be home to vineyards until the last century but only a few overgrown plots remained. You will soon arrive another lookout point offering a great view over the lake. The open rocky grassland bordering the hollow track that follows is the only habitat in Hungary for cloak fern (Notholaena marantae), a relic from the Tertiary. You may also encounter one of the largest insects of Europe called predatory bush cricket (aka spiked magician, Saga spedo). Down at the junction keep to the left to traverse the western slope of the hill.

Attractions along the upper cart track

Past the former viticulturist’s house, the trail reaches the Lion Head Spring built in 1901, which provides good quality and soft water. Do not miss this opportunity to taste it.

After 200 metres, you will arrive at two famous rural Baroque buildings. Tarányi wine press house was built in the late 18th century allegedly on the foundation walls of a chapel from the Árpád era. Lengyel Chapel next to was built in 1775. Both buildings were commissioned by the Tóti-Lengyel family. The wine press house is ornamented with sculptures of ancient Roman gods. The chapel is decorated with sculptures of Saint George, Saint Emeritus (in niches of the tower), Saint Peter, Saint Paul, Antony of Padua, Saint Joseph (in niches on the left and right) Saint Stephen and Saint Ladislaus (on the gable). The stone cross just outside the chapel was erected in 1834.

Just in front of the chapel change to the Yellow (S) trail on the left. The trail continues among vineyards and offers a great view over the Tapolca Basin and Balaton. After a sharp left turn you will arrive at Ify Chapel right below Vércse-szirt.

There is a cross by the trail with the inscription “Ludovico memento morti”, meaning “Louis, remember death.”. It commemorates Lajos Ify, one-time priest of Fonyód. During WW2 he hid several refugees. After the war the communist government tried to involve him as a “peace priest” in the Priests’ Peace Movement (Opus Pacis, a clerical association established under the pressure by the government to counterbalance and replace traditional religious institutions), but he refused to cooperate and turned his back on politics. He joined the Norbertines but when the order was disbanded, he withdrew to his treat built by himself on Szent György-hegy to live a hermit’s life. He continued to hold holy masses in his home and invited many guests, mainly other priests. It was his habit to hoist a Hungarian flag to signal that he was ready to receive guests.

There are five ruined buildings on the plot. Emmaus chapel used to be the priest’s home. The building called “Nectar” used to serve as a wine press house and “Animal” as a barn. “Názáret” and “Remete-lak” (“hermit’s home”) were living quarters. Lajos Ify died at the age of 74 in 1967 and was buried at the back of the plot upon his own request.

Volunteers have been trying to save the buildings, however, structural damages have posed serious challenges.

After a few hundred meters the trail passes an orthodox church and hermit’s home on the left. It was built by Father Márton himself, who renovated and remodelled a former wine press house, as by profession, he was a sculpturer. Continue along the trail and ascend back to the hikers’ lodge. In springtime you may enjoy the view over a drift of violet-purple lesser periwinkles at the bottom of the slope. Follow the Green (Z) trail from the lodge to return to Kisapáti. 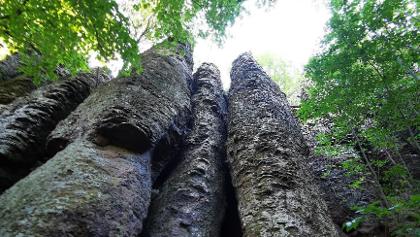 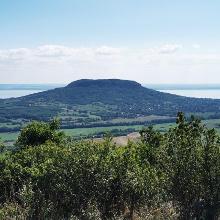 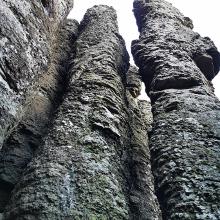 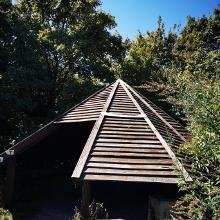