As the number of clear-cuts and young forests also imply, low hills between Mátra and Bükk compensate for the protected forests of the two mountains to meet lumbering needs of the area. Despite this is a pleasant forest hike over 20 kilometers. This zone is traversed by a network of creeks running from northwest to the Great Plain etching hollows in the sedimentary bedrock and forming a wetland in some places on the clay soils.

This is in no way a monotonous hike. In some places the creek valleys resemble the landscape of Bükk Mountains. The spacious meadow of Rozsnakpuszta or the historic and geological attractions of at the two ends of the section each contribute to make it a pleasant experience.

The castle sitting on a tuff peak in Sirok affords a great view over the surrounding valleys and the northern part of Mátra as well as spectacular rock formations nearby (Monk and Nun Rock; “Barát and Apáca Szikla”). The castle of Szarvaskő was also built on a hill of volcanic origin. It is a unique rock formation called pillow lava, which occurs where lava is extruded under water and cools down very quickly contacting cold water.

No access to trailside water. Make sure to have sufficient drinking water supply.

From streets of Sirok hike up to the saddle below the castle. It was built in the 13th century and fell into the hands of Turkish troops in 1596 as its defenders abandoned the castle. It soon lost its importance and started to vanish. Today it is a great lookout point with a view over Mátra.

Right next to the castle hill on the other side of the saddle spectacular rock formations rise called Barát Rock (Monk) and Apáca Rock (Nun). As the legend goes the eponyms fell in love with each other and they petrified for their sin. In fact they are tuff rocks ejected during an explosive eruption of volcanoes nearby and welded together. This hard material resisted erosion as opposed to softer rocks around. Its current shape was further weathered by ice and wind. As the inside of the castle hill is composed of the same easy to carve material, the hill hides an extensive tunnel system made by defenders. Walking just a few meters uphill along the path you will find a rock terrace called Törökasztal, supposedly a pagan ritual site, which also offers a great vista.

Continue northeast along the trail. This hilly terrain was eroded considerably by the network of creeks so elevation change is moderate. Traversing a low hill the trail turns sharply right and then left to cross several clear-cuts and arrives at Rozsnakpuszta in the long valley of Kígyós Creek.

The trail begins a slight ascent through planted pines and continues winding through oak woods to reach the road connecting Egerbakta and Bátor. Head right and at the junction turn towards Bátor. Pass the meadow at the bottom of the hill and past the bridge at the foresters’ lodge turn right onto the dirt track. In Gilitka-gödör, where the trail turns right, the dense forest covering the slopes clearly signals the proximity to Bükk Mountains.

Past a short hike through the valley you will arrive at a large clear-cut with rolling hills all around. Turn left at a road sign and hike uphill to arrive at the edge of the forest. At the junction turn right to reach the pastures around Szarvaskő. The village was built in a narrow valley along a corridor of a road and a creek, which is inappropriate for keeping animals. That is why grazing lands were established on this little plateau by clear-cutting the area. It provides occasional view over the hills of Bükk, Eger and mine pits of Felnémet. As the trail approaches the village a nature trail joins in. Turn right to reach the lookout tower on the top of Major-tető affording a view over Bükk Mountains and Eger (10 minutes). You may feel that natural landscape together with railway tunnels and exposed basaltic formations creates a life-size model railway scenery.

The trail arrives at Szarvaskő in the valley passes the church to reach the center (stamper on the fence of the train stop and in Vár Pub). The black wall of castle hill towering just opposite is the monument of submarine volcanic activity forming basaltic pillows. It also antecedes the world of Bükk Mountains offering a more intact wilderness ahead. 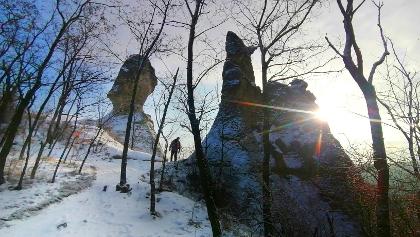 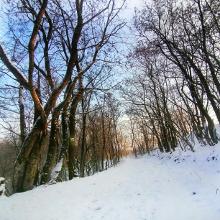 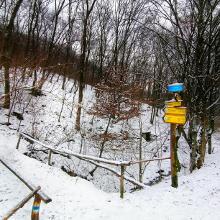 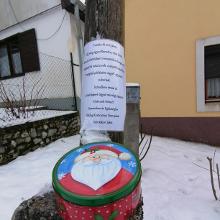