The trail starts from the brickyard of Solymár and enters Pilis Mountains. Past a climb to Teve-szikla it will cross the saddle of Kevélyek and traverses on the side of Hosszú-hegy. Before entering Visegrád Mountains at Pilisszentkereszt Pilis gives you a memorable farewell gift in Dera-szurdok (Dera gorge) with moss-covered rocks, beeches with twisted roots and sweet bridges over the creek.

Hiking from west to east this is where the Blue Trail enters a truly mountainous environment. Although Visegrádi-hegység (Visegrád Mountains) is neither very extensive nor very high its volcanic formations, valleys in radial arrangement and contiguous forests make it very much different from other mountains of West Hungary. It lies in the inner volcanic belt of the Carpathians with a chain of former volcanoes stretching across country borders from here to Hargita Mountains.

The trail passes by the volcanic rocks of Zsivány-sziklák and, of course, the flat-topped volcanic Dobogó-kő with its renowned view over the Danube Bend.

From Rozália brickyard the trail parallels the Budapest – Esztergom railroad for about 1 kilometer. Turn right and cross the rails at the level crossing. Head straight to cross Road 10. On the other side the trail begins an ascent along a narrow street to Köves-bérc . Follow the winding path up the hill passing an overgrown mine pit. The trail ascends to the outskirts of Pilisborosjenő and continues northwest in a scrubland towards Teve-szikla. It is made of hard dolomite sticking out of its softer eroded environment. Looking sideways the wall of a former mine rises with various colors of metal solutions and rock types.

Keep following the trail towards the ascent to Kevély range. Where the trail bends right it is worth making a detour to the Make a detour to the castle ruins built as a movie set in a historic film (Egri vár). Hike uphill along Redlinger Adolf path to the saddle of Kevély range. There used to be a hikers’ lodge in the saddle built in 1928 but it was destroyed supposedly by arson in the ‘90s (stamper at the rain shelter). It is truly worth an hours’ detour to discover the ridgeline of Kis-Kevély and Nagy-Kevély.

The trail descends on the chilly densely wooded slope of Kevélyek. Paralleling Yellow (S) trail passes a karst cave called Mackó-barlang (Bear Cave). Passing an abandoned stone mine head northwest to reach the fields of Csobánka. Lipár Hill offers a view to two directions with Buda Hills on one side and Visegrád Mountains on the other. However, the most impressive element of the landscape is the cliff of Oszoly towering over Csobánka. Head towards Hosszú-hegy but before starting the ascent along the ridgeline the trail turns right in a saddle. You can get refreshment passing a forest chapel with an encased spring (Szent-kút).

The trail continues along the northeastern slope of Hosszú-hegy following Dera Creek aka Kovácsi-Creek. The creek marks an important geographical border separating North Hungarian Mid-Mountains (Északi-Középhegység), a part of the Carpathian range and Transdanubian Mountains. Dera Creek, fortunately, is much more than that. The creek has cut a deep hollow into the limestone at Pilisszentkereszt. Probably, it was named “Dera” by locals of Slavic origin as it means “gap” in that language. And yes, indeed, as if the ground had opened in Pilis. Although it is dry except rainy seasons the gorge is really impressive with its mossy rocks and steep walls.

The trail passes a picnic spot and arrives at Pilisszentkereszt along a dirt track (stampers in the center: in the window of the food store; in Felső Pub).

Past the village hike uphill to cross the road to Dobogókő and a paved biking rout. As the trail gets deeper in the forest of Visegrád Mountains rock formations change from white and sharp limestone to dark and round volcanic rocks.

Pass along a small channel among Zsivány-sziklák (Outlaw Rocks). As the legend says King Béla IV fleeing from Mongols hid his treasure around here and later outlaw tried to search for it using this area as a safe haven. The rock formations are remnants of andesite debris from an explosive volcanic eruption in the Miocene (16.5 million years ago). Solid debris deposited on the slopes mixed with liquid lava flowing over and slid down to the valleys at the bottom.  This brecca was more resistant to erosion than its environment and later rose above its surroundings.

Continue along the valley of Kanyargós-patak (Winding Creek) to arrive at Dobogókő, holiday resort. The trail leads to the panorama terrace on Dobogó-kő (Beating Rock). The eponymous rock was formed the same way as Zsivány-szikla, although the rock itself is hardly visible on the terrace. Beyond the Danube Bend you can see Szent Mihály-hegy and Börzsöny Mountains (Section 17) but it is a long hike there still in Visegrád Mountains (stamper at the entrance of Eötvös Loránd Hikers’ Lodge). 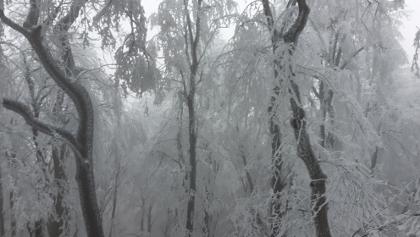 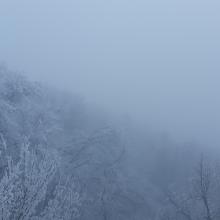 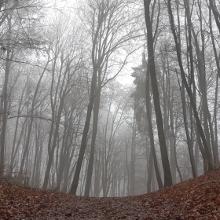 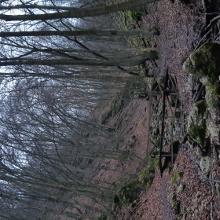