Responsible for this content
Magyar Természetjáró Szövetség Verified partner  Explorers Choice
The 13th section of the Blue Trail from the border of Pilis and Buda Hills to the green lungs of the capital is abundant in geological and botanical attractions. The trail traverses dolomite grasslands and chilly limestone gullies.
open
easy
22.2 km
6:30 h
580 m
585 m

As the trail leaves Piliscsaba behind it enters Buda Hills (Budai Hegység) and starts an ascent through Kőris-völgy and Bükkös-árok to arrive at the plateau near Nagy-szénás Hill with sparse pine groves and dolomite grasslands. Nagy-Szénás is probably the most special peak around the capital. Its treeless grassy peak offers a 360 degree view over the mountains around and Budapest. The hillside with pine groves at the bottom adds a kind of Alpine ambience to complement the landscape.

The trail ascends along a rocky track and arrives at the outskirts of Nagykovácsi. Take a pause at Muflon Itató Pub for refreshment. Make a detour to Solymár, to Ördöglyuk cave or the peak of Sziklás-hegy.

The Blue (K) Trail climbs up to Remete-hegy and then descends from rock to rock into the steep gorge of Ördög Árok Creek with Remete-barlang (Hermit Cave). Past a few hundred meters you will arrive at District 2 of the capital. Hike along the streets of serene atmosphere to pass the shrine church of Máriaremete and Nagy-rét to arrive at the terminus of Gyermekvasút (Children’s Railway) in Hűvösvölgy.

The trail follows streets of Piliscsaba, crosse Road 10 and passes the cemetery where the first hiker to complete the entire Blue Trail, József Horváth is buried (Blue L (KL) spur trail from the western gate to his grave).  As we exit the village the trail continues in the Buda Hills diving into a more urban environment.

Make a short detour from Piliscsaba along Blue▲ (K▲) to two spectacular rocks called Gomba-szikla (Mushroom Rock) and Ördögoltár (Devil’s Altar). Past a slight ascent along Bükkös-kúti-árok the trail begins a steep climb through Bükkös-árok and arrives at the saddle of Kutya-hegy and Nagy-Szénás. Continue through a series of meadows scattered with pines to Nagy-Szénás (550 m). The flat topped horst lined by steep slopes and narrow valleys offers a stunning view over the whole Pilis Mountains and Visegrád Mountains as well as Buda Hills. The extensive forest cover around the area stretches down to Budapest. The 360 degree view complemented by the feather grass cover of the peak and pines at the bottom grant an unforgettable experience.

The trail ascends the hill and passes the memorial wall of Nagy-szénás hikers’ lodge. It commemorates the lodge built in the 1920s by 200 volunteers of a hikers’ club. It was left to decay after WW2 and was pulled down in 1979.

The hillside has the title of “European Diploma of Protected Areas” as a habitat for several native and endangered species including Pilis flax, which lives nowhere else on earth. This varied landscape is made up by various habitats, such as dolomite grasslands, pine groves and deciduous woods punctuated by several rock formations.

Ascend along the rocky path to the outskirts of Nagykovácsi. The trail crosses a clearance with a chain of grey steel structures. They are the supports of a disused ropeway conveyor that carried sand from Pilisszentiván for backfilling abandoned shafts of Nagykovácsi coal mines.

Past a barrier the trail leaves the paved road and reaches the clearing of Zsíros-hegy with ruins of a former hikers’ lodge. After 60 years of service between the 1920s and ‘80s only ruins remained by today. It is worth a detour to hike up to the peak of Sziklás-hegy along the Blue▲ (K▲) spur trail.

The Blue (K) Trail crosses the meadow and enters the woods to reach Muflon Itató Pub (stamper on the oak in front of the pub and on the fence).

Proceed along the path in the woods towards Remete-hegy. Traverse the plateau of Kerek-hegy and Remete-hegy. Looking down from the clearing of Kovácsi-erdőföldek you can see the northern districts of Budapest and Megyeri Bridge. Flora gradually changes to karst scrubland as approaching the rim of the plateau. Then the trail steeply descends along a rocky path down the gorge of Remete-szurdok. It is one of the wildest gorges in Buda Hills. The creek gradually cut its way dissolving limestone and also forming 20 plus caves at various heights. You can spot the yawning entrance of  Remete Cave where several finds were discovered by archeological excavations. Ördög-árok Creek directly feeds the Danube, however its last section runs under cover beneath the city.

Past the rock keeping cars out the trail enters peaceful streets of Budapest. Follow the Blue (K) markers to Ördögárok Street and head left. Ascend along the street and turn left again onto Kerékhegyi Street, and then right onto Hímes Street. The trail passes the shrine church of Máriaremete built to host an icon depicting a Virgin Mary statue associated with a miracle.

Ascend to Zsíroshegyi Street and hike until Náncsi néni Restaurant. Turn right and hike to Nagy-rét (Grand Meadow). Cross Fazekas-hegy to reach the terminus of Gyermekvasút (Children’s Railway) in Hűvösvölgy (stamper in the waiting room and on the platform). 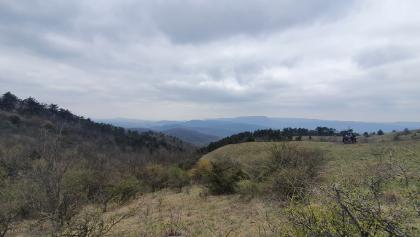 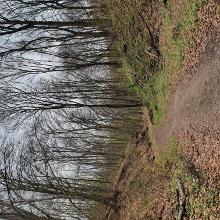 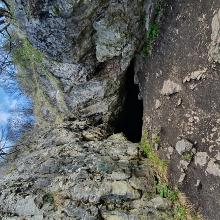 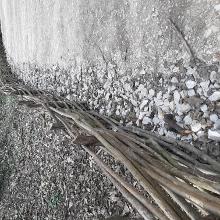