Panorama Hunting at the Danube Bend

This tour is a real treat for those looking to enjoy the stunning beauty of the Danube Bend from a number of lookout spots and lookout towers. We even visit a cave system that used to be inhabited by hermits in the Middle Ages.
open
moderate
12.4 km
5:00 h
613 m
603 m

Börzsöny and the volcanic mass of Visegrád Hills across the river used to be one geological unit in the old times. Two million years ago, when the sea receded from this area, the ancient Danube found its way between the two ranges and cut the structural unit of the landscape in half by continuously and steadily eroding the hills. We will see the greyish volcanic rock, andesite often on our tour.

The first section of our route leads on the side of Szent Mihály Hill. In exchange for putting in some extra distance, we get precious shards of panorama blinking at us every once in a while. If we would like to see the whole S-bend of the Danube, we can visit the lookout tower on top of Prédikálószék across the river.

We walk past the pieces of andesite around the quarry on our way to Remete Cave, where hermits used to live in the Middle Ages. There are only two other places in Hungary where artificial caves are found that used to be inhabited by hermits: Tihany and Szentkút.

Walking uphill to Hegyes-tető, we can see several holes in the ground resembling deep, gigantic wells. These are prospect holes that were used in ore mining at the beginning of the 1970s. The mines closed down since, and the holes are slowly filling up as the forest reclaims the area, but it is best to stay away from the edges and not cross the railings. The ground around the holes is soft and crumbles easily, and it is close to impossible to climb out of the holes without professional equipment once we fall in.

We will be rewarded with the most majestic panorama of the tour at the highest point of our route, from the top of Julianus Lookout Tower on Hegyes-tető. At first it could be unusual and surprising that the panorama is decorated by the Danube both looking east and west. The southern part of the horse shoe shaped curve is blocked from our view by the mass of Szent Mihály Hill. On its right side, in the direction of the path leading down the hill, we can see the houses of Szob, and to the left, the nearby rooftops of Nagymaros are visible. On the other side of the river, we can feast our eyes on the picturesque Citadel.  The stone tower was built by the Encián Tourist Club in 1939.

Descending to Zebegény, we can climb up to the Kós Károly Lookout Tower on Nagy-Kerek Hill. It is not an accident that the wooden structure is shaped as a watchtower: It honours the memory of the ancient Roman defensive line, Limes. From the lookout tower, we can see from Zebegény below us to Pilismarót across the river.

The railway stop of Nagymaros is a 300-metre walk on the red (P)  trail and the National Blue Trail (blue (K)) following Magyar street from the bank of the Danube. Having passed under the railway bridge we switch to the yellow square (S◼) trail, which will lead us out of the village. After the intersection of Dózsa György road and Német street make sure to check out the phone booth library, a local, donation-based initiative, where everyone can decide how much they want to give for borrowing a book. Across the street, we can top up on calories for the road ahead at the best cake shop of the area. Make a short stop at the statue of Saint Elizabeth of Hungary at the junction of Szív street. Turning onto Szamaras street, our path continues among quaint cellars and weekend houses. At the Szamaras parking lot the asphalt gradually disappears from the road, the ascent starts to level out a little, and we soon find ourselves in a young forest. Turning right on the yellow (S) and yellow cross (S+) trails crossing our way, we continue the tour with a pleasant walk under the shade of the trees.

At a right turn, the Gánti memorial sign points the way to our first panorama point. In exchange for an extra 200 metres, we can enjoy the scenery of the Danube Bend from the side of Rigó Hill, from the favourite resting spot of chemical engineer dr. Tibor Gánti. Looking right from the jagged hillside, the rooftops of Dömös look as if they were polka dots on the skirt of the Visegrád Hills. The nature lover Gánti, who frequently visited this spot to relax a bit, worked on separating living and non-living things and studied the origins of life as a scientist. His work paved the way for the theoretical foundations of creating life artificially. He was awarded a number of prizes: the Otto Herman Scientific Award in 1982, the Award of the Federation of Technical and Scientific Societies (“MTESZ”) in 1986, the Pro Natura Award in 1989, and the Pest County Scientific Award in 2006.

The terrain changes as we turn left on the yellow tunnel (SΩ) trail. We climb up Ördög Hill on the steep, crumbly path that is rather difficult to walk on, then we reach the Ördög Ridge where we can peek out from between the trees at three places. The paths branching off the trail are easy to spot, but we can also use the track marked on the map for navigation. Pay attention to how different the landscapes unfolding in front of our eyes are at the various lookout spot, even though they are quite close to each other. At the Kuntner Gábor resting stop on Ördög Ridge, we can see the hills of Visegrád behind Dömös, with the deep gorge of Rám Ravine carved out by Malom Creek. Left of the winding Danube, on the other side of the gorge stretching below us, we can see the path leading to the cave at the side of Remete Hill.

As we descend to the quarry, it seems as a giant took a huge bite out of the hill towering above us. The dark grey blocks of andesite next to the road lie there as proof of the volcanic origins if the hills. We start out on the steep ascent to Remete Cave balancing on the smaller, crumbled up pieces of volcanic rock. The monks have carved out the caves in the 11th century, and according to research, they lived here until the Ottoman era. The cave gives shelter from the wind and rain, and it can even be used as bivouac shelters. The panorama is quite something from the inside too, but it is well worth walking out to the edge of the porous block of rock for an even more majestic scenery.

From here, we go back on the joint section of the yellow tunnel (SΩ) and the blue tunnel (KΩ) trails, then with a sudden, steep left turn, we start the most challenging uphill section of our tour on the blue tunnel (KΩ) trail. When we reach the yellow cross (S+) trail branching off to the left, we are almost relieved to walk the extra 100 metres for the downhill slope of Dobozi-orom. We can collect our next panorama shard under the shades of the lookout spot’s trees, and this is where we catch the first glimpse of Pilismarót, situated a little further away from the line of the Danube.

As we return to the blue tunnel (KΩ) trail, the yellow cross (S+) also joins our path for a while. When they separate, we follow the blue tunnel (KΩ) trail, which goes around the summit of Szent Mihály Hill, then continues level to the ridge of Szent Mihály Hill. We turn left here onto the blue (K) trail, which we will be following until the very end of the tour. On our way to Hegyes-tető, we pass by a couple of enclosed prospect holes resembling huge wells. The holes were carved out with pickaxes in the Middle Ages, in search of precious metals (gold, silver), lead and tellurium. The miners descended into the holes on wooden ladders, and the excavated resources were brought up to the surface in leather bags with the help of pulleys.

The “grand prize” of the tour awaits us on the 482-metre-high summit of Hegyes-tető, at the top of of Julianus Tower built in 1939. We can enjoy a breathtaking panorama of the Danube Bend from here, a part of which is “blocked from view” by the cone of Szent Mihály Hill. Leaning slightly over the railings, we can even spot Zebegényi Island on the river. We can read about the origins of the hills a few metres from the entrance of the lookout tower, and on the other side of it a fire pit, tables and benches serve those having a picnic in mind.

Going on from the summit, we can look forward to a relaxing descent on the yellow (S) trail all the way to Zebegény. Getting in line with the municipality, some rooftops are already peeking through the hillside forest, but we always have the option to add a little extra distance to our tour by following the yellow triangle (S▲) trail or walking along the stations of the cross of the calvary starting from opposite the cemetery to visit the wooden building of the Kós Károly Lookout Tower resembling a Roman watchtower, built in 2015. It gives us a nice view of Zebegény and the Dőry Castle below us. With a short walk on the top of Kálvária Hill, we can also visit the National Flag, the Heroes’ Memorial, Kálvária Chapel and the Trianon Memorial.

As we return to the yellow (S) trail, we can find a pump fountain at the entrance of the cemetery, where we can top up on water if needed. From here, we descend to the residential area among picturesque, quaint village houses. Among the numerous sights of Zebegény, our route passes by the Sailing History Museum, the Iron Museum, the Saint John of Nepomuk Chapel and the Saint Mary Major Chapel; and finally it leads us back to the railway station. 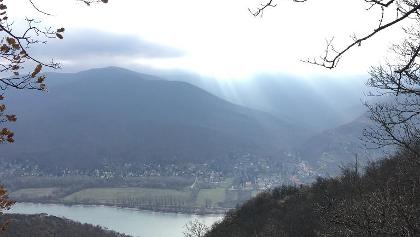 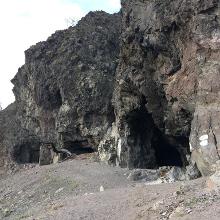 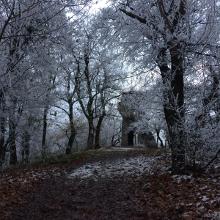 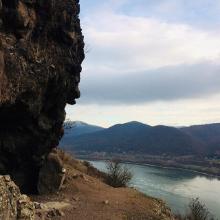