Hiking all along the longest continuous trail of our country is a great challenge and a great opportunity to learn about rural Hungary. Hikers may cover the 27 sections without time limits and in any order. The drop-down list above includes these section to provide you with detailed information on each, you can check the elevation transect, points of interest and the list of stamping locations.
Open
difficult
Distance 1,164.5 km
Duration343:25 h
Ascent31,425 m
Descent32,020 m

By January of 2021 more than 7000 hikers had completed the legendary National Blue Trail of Hungary marked with a blue horizontal stripe (1165 km). The trail traverses the northern side of the country between Írottkő and Hollóháza via each major mountains, the capital and Balaton too. The terrain, the atmosphere, geological and cultural values are so much varied that each section and each day gives unforgettable experiences.

Although the trail can be covered from any direction, the descriptions and numbering follow a west to east order. The trail sets off from Írott-kő in Kőszeg Mountains, the highest point of West Hungary. It crosses the plain of Kisalföld to arrive at the lakeside of Balaton. Via the most beautiful hills and basins of Balaton Uplands you will enter the vast forests of Bakony Mountains. In the meantime, you will visit historic towns and climb peaks offering splendid vistas (, , ), explore castle ruins (the castle of , Rezi, and ), but spiritual experience is also granted (, Abbey of Zirc).

The trail crosses lower hills of Vértes and then Gerecse abundant in lookout points. Skirting Pilis you will reach the capital and Buda Hills around it to visit popular destinations like ,  or .

Approaching the Danube Bend the trail passes one of the most beautiful gorges of the country (the gorge of Dera Creek) and , the cradle of Hungarian hiking movement.

You will say farewell to West Hungary with the view from and by crossing the Danube your hike across East Hungary begins in Börzsöny Mountains. Lookout points and towers one by one: , Nagy-Hideg-hegy and the highest peak of Börzsöny, . Past Börzsöny the trail traverses rolling hills of Cserhát with neat palóc villages including the World Heritage Site of Hollókő.

After leaving the hill behind the trail enter the popular Mátra Mountains with the two highest peaks of the country. Hiking along the ridge you will reach the special of at 963 meters for a memorable vista. Further on the ridge the trail arrives at , the highest peak of Hungary at 1014 meters. The section from Kékestető to the eastern edge of Mátra poses the toughest challenge of the Blue Trail with hike repeatedly up and down all the way. It is the numerous lookout points that award you for the effort.

It is worth making short detours to points of interests, such as the Cistercian Abbey Church of Bélapátfalva or the highest lookout point of Bükk with near Bánkút (956 m).

Next the trail crosses the hills of Borsod to enter the northernmost subregion of Hungary, Karst of Aggtelek. Do not miss to visit the World Heritage Site of the Caves of Aggtelek. The cavern of Baradla-Domica stretches as long as 25 km and hides stunning dripstone formations assuring a stunning insight into the underground world of calcareous limestone.

Past discovering the karst region the trail winds through Cserehát, an impoverished region, yet rich in natural and architectural sights. You will reach Zemplén Mountains at the  photogenic for its age (short detour). The mountain is characterized by tent-like mounts (with references to this feature in some geographical names with “sátor” meaning “tent”) and peaks with castle ruins, such as the . 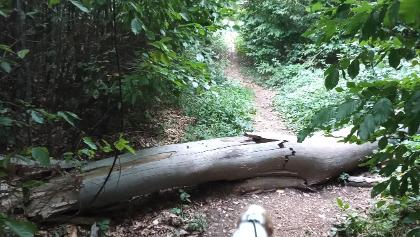 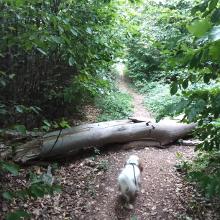 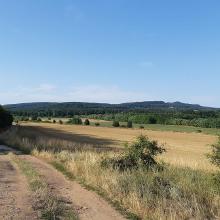 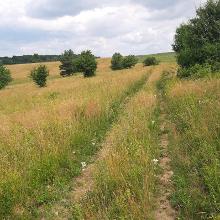 This is the second longest flat section of the Blue Trail. Practically, it winds throughout a flat area all the way except some ascent around ...

The Castle Hill of Sümeg rises above like a beacon of Bakony Mountains as you are leaving it behind heading towards the mountainous sections of the ...

„How much peace and delight and how much to see and learn this land provides…” – wrote geologist Róbert Reichert in 1936. And yes, this is an ...

The Blue Trail dives into the woods of Bakony Mountains. After climbing to the peak of Kab-hegy the trail descends into geological past running ...

The 8th section of the Blue Trail arrives at the most mountainous part of Bakony traversing a landscape interspersed with steep and long climbs, ...

The 9th section of the Blue Trail traverses the most varied landscape of Bakony abundant in karst formations and with chilly gorges, spacious ...

The 11th section of the Blue Trail guides you through Gerecse Mountains abundant in lookouts. Rocky paths, dense forests, cliff lookouts and ...

The Blue Trail traversing around the foot of Pilis Mountains stays at the bottom of huge limestone cliffs and avoids lookouts. This section offers ...

The 13th section of the Blue Trail from the border of Pilis and Buda Hills to the green lungs of the capital is abundant in geological and ...

The 14th section of the Blue Trail is an easy hike of exactly 14 kilometers through the Buda Hills with a climb up to the horst-like peak of ...

The 17th section of the Blue Trail crosses the vast forests of Magas-Börzsöny, climbs to its highest peak and grants a retrospect looking back on ...

Throughout the 18th section the Blue Trail explores the rolling hills of West Cserhát between Börzsöny and Mátra. The only exception that rises ...

The 20th section of the Blue Trail explores the western and central part of Mátra Mountains. The trail elevates from 180 meters to 964 meters ...

The 21th section of the Blue Trail sets off from the highest peak of Hungary and begins a ridgeline hike of unmatched beauty. Exploring picturesque ...

Covering the 25th section of the Blue Trail you will explore Szalonnai-karst rising above the valley of Bódva Creek and rolling hills of Cserehát ...

The 26th section of the Blue Trail guides you through Zemplén, the mountain with the most typical Carpathian character. During your hike you will ...