Responsible for this content
Magyar Természetjáró Szövetség Verified partner  Explorers Choice
The Blue Trail dives into the woods of Bakony Mountains. After climbing to the peak of Kab-hegy the trail descends into geological past running along the gorge of Úrkút paleokarst.
Open
moderate
Distance 22.6 km
Duration6:30 h
Ascent470 m
Descent440 m
Highest point598 m
Lowest point227 m
Bakony is the most extensive mountain in Hungary but despite it is a landscape of rolling hills and mild slopes. The vast forest area is in intensive use and yet it offers a number of cozy valleys, cute clearings and stunning views during your hike. The trail traverses a hilly terrain mostly in the woods. At the beginning you will climb to the peak of Kab-hegy (599 m) to enjoy the view over Bakony for the first time. Then the trail descends to Úrkút where you can visit “Jurassic Park of Úrkút”, a unique attraction of paleokarst at Csárda-hegy revealed by local mining activity. Finally, after crossing a valley with a chain of clearings the 7th section of the trail ends in Városlőd.

Set off from Kinizsi Castle to start the 7th section through Bakony. Take the footpath near the ruins to reach Varga Street and head left. Past the last buildings of the village turn right at the junction to descend to the valley of Vázsonyi-séd. In a few minutes you will reach the road leading to Tapolca. Turn left and hike along the road. Right before a distance sign (Tapolca and Sümeg) take the wide dirt track on the right to cross the fields at the foot of Kab-hegy.  At a crossing dirt road change to the other side of the bushes and the trail arrives at the woods called Bogárdi.

The forest around Kab-hegy is divided into plots in chessboard pattern for intensive use. Clearances (nyiladék) are numbered from left to right and crossing clearances bear letters of the alphabet. The trail follows Clearance 5 and turns right onto Clearance H. Turn left onto Clearance 6 at the next corner. After a lengthy hike the trail crosses Clearance G and ascends steeper and steeper towards the towers. The peak does not seem high and yet it rises 300 meters above. Except close to the peak do not expect steep slopes on Kab-hegy as thin and highly fluid basalt lava could spread over a large area creating a shield volcano with a low profile.

Hike along the fence lining the dirt track. At the gate climb the ladder over the fence. Follow the Blue (K) markers across the fenced grove. Climb over the fence on the other side of the grove and continue through the old growth forest along a more accessible logging track. The trail is steeply descending to the fence around the building on the peak, where head left. Soon you will reach the end of the paved road. A spur trail branches off to the right to Kinizsi lookout tower and some benches on the southern edge of the hill.

It is highly worth the detour to enjoy the most memorable view of this section. From the tower the hill surrounding the peak seem nearly flat with an extensive green cover. In clear weather even the bright surface of Lake Balaton is visible in the south. Turning to the other side the next part of the section reveals with round hills and small villages.

Return to the paved road. Pass the buildings and descend past the TV tower. Hike along the straight clearance and check the stamper at the former forester’s lodge of Kab-hegy (the building opposite).

Descend onwards along Clearance D. In 1.5 km the trail passes Clearance 7, which opens the view towards High Bakony. Turn left onto Clearance 8 to shortcut a loop of the paved road and trail soon returns to it. Keep hiking along the winding road. The trail passes Tönkölyös-víznyelő (sinkhole), an evidence for karst processes in Bakony and crosses a young grove. Climb the ladders again to get over the fence. Continue through a denser grove to arrive at Úrkút. Take the main street towards the center and get the stamper at Kéktúra Vendéglő (Blue Trail Restaurant).

At the end of Gubiczahegy Street the trail arrives at the paleokarst area of Csárda-hegy (Inn Hill). Fortunately, despite past mining activities tropical karst formations remained. These karst formations from the Jurassic period hosted manganese ore serving as a basis for local economy for decades. After finishing the educational loop trail continue along the Blue Trail to exit the village.

The trail follows a dirt track to a large fenced grove and then descends into Csollányos Valley. The gravel road, which replaced a former logging railroad, traverses a series of cozy clearings to reach Sobri Jóska Adventure Park and the mining village on the outskirts of Kislőd. Cross the bridge over Torna Creek and the railroad through an underpass. A short climb will take you to the road connecting Kislőd and Városlőd. Turn right to arrive at Városlőd-Kislőd railway station (stamper near the office on the wall). 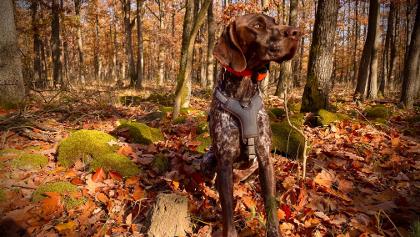 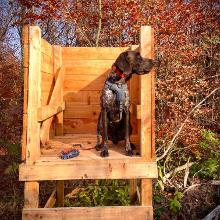 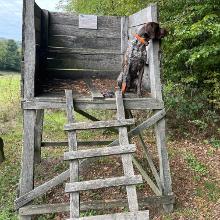 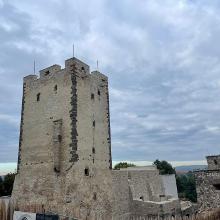