Responsible for this content
Magyar Természetjáró Szövetség Verified partner  Explorers Choice
The 21th section of the Blue Trail sets off from the highest peak of Hungary and begins a ridgeline hike of unmatched beauty. Exploring picturesque forests and lookouts of this section will be the toughest of hikes along the Blue Trail.
open
moderate
25.8 km
8:10 h
1,020 m
1,560 m

Basically, eastern Mátra is a 13 km-long southwest-to-northeast ridgeline with short and steep side ridges attached on both sides. The steep valleys between them hide rapid creeks (Závoz-völgy), cascades (Ilona-völgy) and gorges (Tarjánka-szurdok). These valleys divide the ridge into a series of saddles (“kapu” on the map) and conic peaks making the hike in this section keep rolling from peak to peak.

At the same time, this is one of the most beautiful hiking trails in Hungary. Steep cliffs and the vista from andesite rock formations over the flat Alföld (Great Plain) to the south or mountains to the north and east truly reward hikers for their effort. As the mountain is not very extensive and neighboring mountains are close Mátra grants an unusually intensive sense of height from its lookout points.

The picturesque hike between Kékes-tető and Markazi-kapu runs along an especially narrow ridgeline. The top of the andesite crest sometimes hardly provides space for more than a footpath. The trail passes the cliff of Sas-kő, which affords a view over both sides. This is especially exciting in mild winters when the hillsides in the north are snow-covered while the mosaic of fields in the south show a cavalcade of colors.

The landscape of this region was inappropriate to establish settlements as it lacks flat mountain tops as opposed to West Mátra. As soon as we step into the silver world of mature beech forests past Kékes-tető traces of human activity are limited to hiking and logging trails and buildings.

Compared to other mid-mountains in the country Mátra is abundant in rock formations and natural lookout points. Together with exposed ledges and nomadic circumstances these features make your hike through East Mátra one of the most memorable hikes all along the Blue Trail.

Set off along the paved road to Kékes and past the exit sign of Mátraháza take the foot path into the wood on the left to reach the grassy ski track. Ascend along the track to Kékes-tető. Looking back you can enjoy the view to the west with the silhouette of Naszály and Visegrád Mountains.

Just in front the TV tower is rising (176 m) and on the left the stone in Hungary’s national colors signal the highest point of the country at 1014 meters. Expect only a flat top not a peak. Kékes-tető, anyway, was an unknown mountain top until Hungary lost large areas with all its higher peaks as a result of Treaty of Trianon. Development started only in the 1920s by building a ski resort soon making it a popular destination. Unfortunately, developments lag behind modern needs.

The TV tower offers an excellent 360 degree view with as distant mountains on the horizon as the High Tatras and Great Fatra. It is worth visiting it in winter too when it rises beyond cloud cover (stamper at the entrance of the medical center; in summer; Check its park for tame squirrels).

The trail enters a mature beech forest near the tower and leaves civilization behind. Keep ascending and pass the junction of the cross-country ski track (“síút”) just bending in a saddle. The ridge narrows down just to a few meters and you will arrive at Szent Erzsébet-kereszt with a beautiful vista. From then on the trail is lined with a perpendicular rock wall. Rushing waters of neighboring creeks etched off the ridge and hard andesite got protruded by the erosion of its environment during the last ice age. At the foot of the wall scree has accumulated. At a point the ridge gets so narrow that the trail follows the rock plates. Finally, you will arrive at a cliff protruding to both sides.

Sas-kő (Eagle Rock, 898 m) is a great lookout point with a wide angle view to the north and east with the Bükk plateau, the round Hills of Heves-Borsod and the elephant-like mass of Karancs. At the peak a monument from 1930 commemorates hikers who died in WW1. Climbing down on the southern side of the rock you will get to another lookout point hanging over the valley with a view towards Alföld (including Mátra Power Plant using local lignite deposits).

Past Sas-kő the trail leaves the ridge and descends to the side to round the cliff of Kis-Sas-kő (Little Eagle Rock). A small clearing along the path affords a view back to Kékes and Galya with intact spots of mature woods on the northern slope of the mount. You will soon arrive at Markazi-kapu. Geographical names with „kapu” refer to saddles or passes across the ridge north-to south. They make your hike quite tiring as every ascent is followed by a descent. So to reach Hármashatár (stamping location in rain shelter) you need to climb Mraznica-tető and Felső-Tarjánka, too.

The trail steeply ascends to Nagy-Szár-hegy (743) but the mount with a grove of ancient twisted trees on the top awards you with a view to the south and west. Proceed to enter the dense forest, although this part shows more and more signs of intense forest management.

The next peak to climb is Oroszlánvár with an obstructed view to the south. It used to be the site of a castle built after the Mongol Raid (moat still visible). A steep and slippery ascent takes you to Domoszlói-kapu, where not only a road crosses the ridge but the high voltage overhead power line also. Rolling is not over yet. The trail ascends to the twin peaks of Jagus and Nagy-Zúgó-hegy (600 m) with a hunters’ lodge in the saddle.

The next challenge is Szederjes-tető (675 m). Past the peak the trail continues on an easier and descending terrain with fewer obstacles. After a half an hour’s hike you will arrive at Gazos-kő.

This is where Mátra last shows its picturesque landscape from an exposed rock with a wide angle view on lower hills of the mountain and streets of Recsk beyond the forest in the north. Back in the woods that trail passes a few more tops and leads to the valley of Tarna river, the borderline of Mátra. Past a rain shelter you will arrive at a paved road and continue to the right to the disused train stop (stamper). As no train takes you home from here, head north and at the junction turn right onto the road to the village. You can find the stamper for the most exciting Blue Trail section on the terrace of Hunor Restaurant. 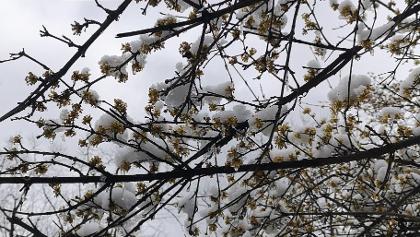 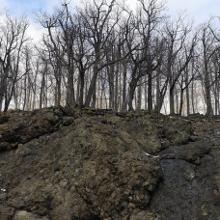 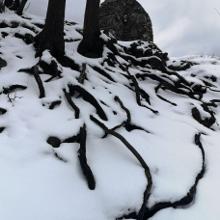 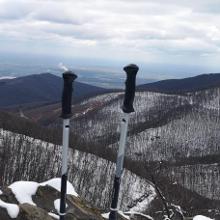