Hiking on Mediterranean trails of Tihany

Although the noise of cicadas and the coniferous forest environment give a Mediterranean character to Lóczy nature trail, it does not wind near the blue sea but the green Lake Balaton. This hike presents the most exciting attractions of Tihany peninsula and offers one of the most extraordinary views in the country.
open
moderate
Distance 13.3 km
Duration5:00 h
Ascent493 m
Descent479 m

Tihany Peninsula is like a landscape model: it features various landmarks but at a smaller scale. There is no volcano but there is a lake filling remains of a crater. There is no geyser but there are geyserite cones. There is no sea here and yet pine trees and cicadas imitate an environment typical of Mediterranean seaside. Of course, these analogies are here only to help imagine the atmosphere, however, hiking around Tihany peninsula will be a memorable experience on its own.

As Hungary is poor in sizeable surfaces of water, hiking all day close to bodies of water is possible along our rivers mainly. But lakes (and seas) are different. The view over vast and open water is offered by the shoreline of Balaton, however, the flat terrain cannot please us with a bird’s eye view. That is why Lóczy trail guarantees a unique experience as it offers a view over Balaton from above and from close at the same time.

As the area is quite a popular tourist destination, geological values and the unparalleled landscape deserves protection. This was the first landscape protection area is Hungary, today it belongs to the Balaton Uplands National Park. Anyway, it gained the European Diploma in 2003 demonstrating that it represents an exceptional conservational interest on the continent. Without this protection, probably the splendid view itself would lead to irretrievable loss of natural values as it understandably would greatly appeal to investors’ imagination.

Lóczy Lajos walkway was the first nature trail in the country and it hardly could be at a better location. Not only because of the view but the information boards (or guides of the national park) make it a geological lexicon of the area. The distance is reasonable and shortcuts are possible (total distance: 17 km).

A view over silent volcanoes

From the bus stop, the trail parallels the main road towards the western side of the peninsula. The small lavender field that you will pass is one of the first lavender plantations from the 1920s. At the ruined church, the only remains of the devastated and abandoned village of Apáti, the Green T (ZT) trail enters the woods and leads uphill on the slope of Apáti Hill. At a clearing the Yellow ▲ (S▲) spur trail on the left begins a short but steep ascent to Őrtorony lookout tower.

It offers an incredible 360-degree view and the structure of the peninsula is presented from here like a model landscape with signature landmarks each demonstrating an episode of local geological history. When 7 million years ago basaltic lava broke through the thinned crust of the Carpathian Basin, volcanism of Balaton Uplands began right here, on the peninsula. Melted rock failed to reach the surface of the wetland but could vaporize the water content of the sediment, generating a huge explosion. Lithified debris formed tuff rings around the vents. One of them were detected in Outer Lake, another in Inner Lake and the third one south of Csúcs-hegy. After volcanism, these low-relief flat floored craters called maar fill up with water to form natural lakes. Maar may also refer not only this subtype of volcanoes but the lake itself too. Past 4 million years of vulcanism, the landscape calmed down, and tuff rings began to erode. This transformation was accompanied by intense thermal spring activity. The three separate basins that later merged by subsidence to form the lakebed of Balaton were formed around 20-25 thousand years ago. Water level varied by climate changes. There was a period when Tihany was an island. Landscape was fundamentally transformed by human activity. In the early 19th century canals were made and Outer Lake was drained to make meadows. Forests were limited to the edges of the peninsula and the highest peaks. Expanding tourism called for taking steps to preserve local natural values and in 1952, the first landscape protection area of the country was formed here. Today it belongs to the Balaton Uplands National Park, and boasts with the European Diploma as a location of exceptional conservational interest.

Return to the nature trail and continue to the peak of Nyereg-hegy. The white rocks create a somewhat hot microclimate and habitat even in springtime. The view over the western basin of the lake begins to unfold here. The bay just next to the peninsula is rather peaceful as the shoreline is mostly intact, nearby villages are less frequented and boats are also rare. Actually, this is only spot around the lake to observe the western basin lengthwise with a view both over the northern and the southern side. Where the trail bifurcates the pathway to the right leads to a cave named after a famous outlaw of the area in the early 19th century (Sobri Jóska), who, anyway, may have never been there.

The trail continues to be rolling with several spots to enjoy the view. Then you will descend to a paved road. After crossing the road, a lengthy ascent with fewer lookout points begins to the picnic spot on the top of Hálóeresztő-hegy.

The trail stops to follow the shoreline and turns inside the peninsula. The white rock formations bordering the pathway are geyserite cones, several of which can be found on the southern tip of the peninsula. After volcanism ended in the area, the site of Balaton was a wetland. Water oozing to hot rock down below returned to the surface through cracks in the form of hot water solutions. This geological environment fed more than a hundred thermal springs (not to be confused with geysers). Their high silicic acid content contributed to the cementation of other rocks. When reaching the surface, geyserite and limestone were deposited from the water due to sudden temperature drop. Checking some of the cones from close you may even see their vents. The internal structure of some formations was opened up by mining before they gained a protected status.

The most splendid view over the Inner Lake is offered by the geyserite cones. The Green T (ZT) trial slaloms among several strange boulders. The most famous is the rock of Aranyház (Golden House) named after yellowish lichen that grow on its surface. It is especially spectacular in autumn. The view over inner parts of Tihany is amazing from its top, but does not compare to that of Hármashegyi geyserite cone (further down along Yellow + (S+)). It boasts a picturesque vista over the dark blue surface of Inner Lake, the village of Tihany, and the turquoise green Balaton. Follow the Yellow + (S+) markers to descend to Inner Lake. Turn left on the shore to return to the Green T (ZT) trail.

Back to the shore

After rounding Inner Lake, the trail leads uphill again to Szélmarta-sziklák (Weathered Rocks) on the top of Kis-erdő-tető. These rock formations were also formed in basaltic volcanism. As a result of tectonic shifts, they got tilted and softer layers of the rock composition have been abraded by wind-transport. In the meantime, freezing water in the cracks also shaped the soft tuff. This is a perfect spot to take a rest before the last rolling section of the hike.

The trail descends again to cross the paved road leading to the village. Then an ascent begins to reach the peaks along the eastern shoreline. The view unfolds towards the Bay of Füred, Balatonfüred and Csopak. A short loop will take you to the outer edge of the hills and the last section of the hike begins.

The slope of Óvár-hegy hides an attraction that excites many visitors coming to Tihany. The caves of Barátlakások (Monks’ Homes) could be formed in the basaltic rock as it is soft enough to carve due to its structural composition. Monks moved here in the 11th century. Some of the caves were buried by rockslides but the rest were renovated and secured. The only spring of the peninsula (Ciprián-forrás) is nearby, which also could support their life here.

An atmospheric pathway leads to the paved lakeside road. Walk 100 meters on the other side to reach the ferry port with the bust stop. 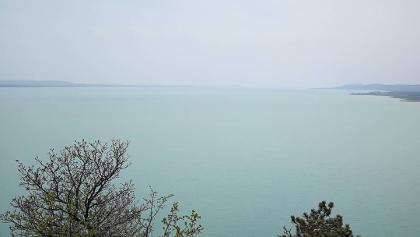 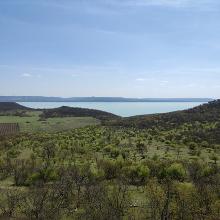 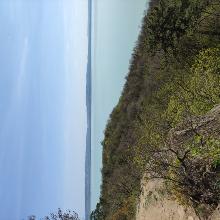 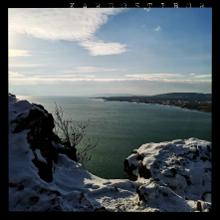