Not recommended in icy or snowy weather due to steep and slippery sections.

Treasure hunters may try to find the geocaches along the trail (a traditional one on Kis-hárs-hegy and the monastery ruins, a multi-cache together with a cute witch on Nagy-hárs-hegy).

From the parking lot (or Children’s Train stop) of “Szépjuhászné” follow the Yellow (S) markers towards Nagy-Hárs-hegy.

Approaching the peak with the lookout tower take a pause on your hike at the atmospheric resting spot with benches, tables and a fire pit. The vista offers a view over slopes of Pilis Mountains.

It is just 50 meters to reach the peak of Nagy-Hárs-hegy (454 m) with Kaán Károly Lookout Tower. The eponym was a forest engineer and as a Deputy Minister of Agriculture he worked on plans to reforest the Great Plain to make up for the loss of forest area by the Treaty of Trianon. He is also renowned for implementing modern environmental protection in Hungary. Beside the lookout tower a spring and a hikers’ lodge also commemorate him. The four-storey tower was fully renovated in 2016. The observation deck boasts a 360-degree view with Csúcs-hegy and Hármashatár-hegy in the northeast, Apáthy-szikla and Látó-hegy in the east, Kis-Hárs-hegy with the capital behind in the southeast, Nagy-Kopasz, Nagy-szénás and Fekete-fej in the northwest with Nagykovácsi and Solymár in the distance.

Continue along the trail and you will arrive at the bridge over the small gorge of Bátori Cave. The entrance to the cave is on the southeastern slope of Nagy-Hárs-hegy just below the peak at 440 meters but it is not open to the public. Due to its hazards entry is allowed by permission only. It was named after 15th century Pauline friar László Bátori, who left the monastery of Budaszentlőrinc to live in the cave as a hermit for 20 years. The legend has it that this is where he wrote his Bible interpretations and stories of saints in Hungarian language, as well as he was the one who did the first complete translation of the Bible into Hungarian, which work he was later beatified for. The cave was allegedly connected with the monastery by a secret tunnel but is has never been discovered. Since 2014 a memorial plaque commemorates his work here.

The trail follows a wide path down to Hárs-hegyi-nyereg (Linden Hill Saddle) where change to the Yellow ▲ (S▲) spur trail to reach Makovecz Imre Lookout Tower in a few minutes on Kis-Hárs-hegy at 362 metres. It is the tower’s shape and not its height (6+ metres) that makes it special. It was designed by renowned architect Imre Makovecz, who was the chief architect of the local forest management agency at the time. The unique structure of the lookout tower is built around a metal pipe with 30 logs attached to form spiral stairs and a small observation deck on the top. The tower built in 1977 was completely renovated in 2006-2008 when the original wooden sleeper steps were changed to logs.

Return to the junction along the Yellow ▲ (S▲) trail and turn left onto the Green (Z)/ Mária (ᵯ) trail to hike back to the parking lot at Szépjuhászné. Take your time to visit the ruins of Budaszentlőrinc Pauline Monastery nearby. A walk among the 700-year-old ruins can be a great finish-off to your hike.

In dry weather no special equipment or boots are needed. 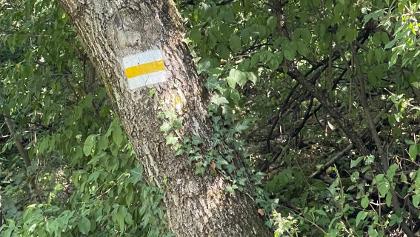 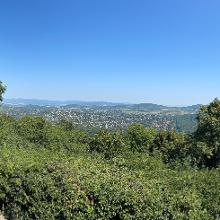 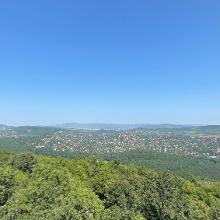 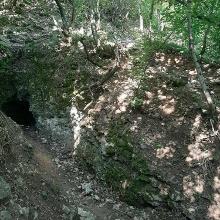