A loop hike to explore a butte with one of the most stunning views of Balaton Uplands, ruins of a medieval castle, wine cellars and two vintage well curbs by Kalligaro.
open
easy
Distance 6.4 km
Duration2:05 h
Ascent277 m
Descent277 m

The butte of Csobánc (376 m) rises over the north-eastern tip of Tapolca Basin.  The peak is crowned by castle ruins easily accessible apart from a short but friable steep to the flat top. The butte is the result of volcanic activity around 3.5 million years ago when lava solidified as a caprock overlying less resistant layers and provided protection from erosion and abrasion.

The flat top home to unique species of plants offers a 360-degree view over the area. In clear weather, you can even spot Schneeberg. The ruins of the castle provide a look into its adventurous past for those with an interest in history too. The bottom of the hill is home to geological rarities: Papsapka-kövek (Priest’s cap Rocks), the most undamaged but less known sea of rocks (i.e. large rocks scattered) in Balaton Uplands. The hike is easy to complete with kids too.

Supposedly, the village was preceded by an ancient Roman fort controlling the trade route. In the Árpád era, the village belonged to the Lád clan occupying Zala county and later became a direct royal property. It was first mentioned in a document from 1182-84 as a subject of royal donation. The lands between Tapolca and Kesző changed hands severaI times in the 13th century. Due to its proximity to Kesző and its former owners, the Gyulaffys, it was mentioned as Gyulakeszi in documents from 1522. In the mid-16th century, the village was devastated by Turkish raids but survived. In 1678, it was acquired by the Esterházys, whose Baroque style mansion is in Petőfi Street.

There are more considerable buildings in the village commemorating former owners: a fortified wine cellar built in the 13th century, a fortified mansion commissioned by the Gyulaffys in 1551, which was devastated but rebuilt more times until the early-18th century. The remains of the latter one served as a basis for the Eszterházys’ mansion, which became the centre for the estate and residence for the estate manager.

In 1748, the catholic church was restored. Its design suggests Gothic architecture as its original sytle. The Holy Trinity columns just opposite was erected in 1910, the stone cross next to the church was carved in 1853. The bronze bust by Tibor Merencsics Tibor behind the building depicts László Gyulaffy, one-time castellan of Csobánc Castle.

Starting from the bus stop follow the Mary (ᵯ) trail, which shares the same path with the Green (Z) trail for a while. Turn left at the church and head towards Csobánc to exit the village. The gravel road passing a vineyard offfers a great view over the surrounding buttes of Tapolca Basin. Past a parking lot the trail continues ahead on a hollow track. Keep to the ᵯ markers and turn right at the wayside cross. The trail levels and passes another cross (1810) as well as the Classicist style Saint Donatus (of Muenstereifel) Chapel (1830). Take a pause and enjoy the view over Gulács and Badacsony from near the almond tree. You may refill your water bottle from the well behind the chapel. As you progress around the hill the view unfolds and stretches to north-eastern areas too including Hajagos Hill with its mine pit and Káli Basin.

As Mary trail joins the Blue (K) trail turn left. Take your time to check Vár-kút (Castle Well), a vintage well at the conjunction. The spring box was made by stonecutter Angelo Kalligaro in 1924. He was born in South Tirol in 1862. First, he relocated to Nagykanizsa, where he spent 13 years. In 1907, he founded a cement and cast stone plant in Tapolca. He had become a reputable member of local society and chamber of crafts. Several of his products are scattered in the area, especially his precast well curbs ornamented with a jug, a vase with flowers and a goose on three sides, and an inscription with the name of the manufacturer ("Kalligaro A. Czementárugyára Tapolcza") and the year of production on the fourth.

The terrain begins to change here as you leave the Pannonian sedimentary rock and reach the basanite slope. The trail continues in a steep ascent to the flat top (376 m). The volcano first erupted around 3.42 million years ago with phreatomagmatic explosions (as a result of interaction between magma and water) forming the lower ring of lapilli deposit. Following the pyroclastic fall, lava flows began building a basanite cap with a thickness of 100-120 metres on the mount. Magma reached the surface through multiple vents resulting in several columns of various thickness. Later basaltic sills intruded the cooling lava lake and formed rock formations like. Volcanic activity ended with lava fountains.

The trail continues to ascend and shortly arrives at a rock outcrop habitat of rare species, such as the Narbon bean and the wild pea. Both are typical in Submediterranian habitats, and the latter one is supposed to be the ancestor of the garden pea. The alpine saxifrage, however, as its name suggests, is a relict of steep northern slopes.

The trail reaches the flat top of Csobánc from the east. It offers a splendid view to the south over the buttes of Badacsony and Gulács, the castle of Fonyód and hills on the other side of the lake. The pattern of vineyards and ploughlands is interrupted only by a few forest patches and the village of Káptalantóti with Sabar Hill and its 13th century church ruins south-east of the village. Further to the south-east you can spot the white pit of the sandmine at the bottom of Rendes Hill hiding Balatonrendes on the other side. In the distance, Tihany Peninsula stretches deep into the lake. In the east, you can see villages of Káli Basin bordered by Hegyes-tű and Tar-hegy.  In the north-east, hills of Southern Bakony neighbour Balaton Uplands including Kab-hegy with its signature TV tower.

The trail continues across the one-time outer bailey over a bumpy terrain. The surface here is man-made designed to hamper moving siege engines. Skirt the former castle garden overgrown by lilacs and you will arrive at remains of the curtain wall. This is also a special habitat, however, probably due to the limestone content of fallen mortar, it favours plants preferring alkaline soil, such as the northern rock-cress, the blues fescue and the golden alyssum.

The castle of Csobánc

The origin of the name is uncertain. It is supposed to refer to the name of an ancestor of the local Rátót clan (“Ssubanus”), a high-ranking official during Béla III. The name of the hill first appaeared in a document from 1221 as the subject of donation, although buildings were not mentioned. The first written evidence for the existence of the castle is from a court trial in 1255. The court case was won by noblemen of Diszel, who supposedly belonged to the Gyulaffy line of the Rátót clan. They had South Italian origins as they arrived together with Coloman I’s first wife from Sicily. The first owner was from among them called Demetere Gyulaffy. The origin of the keep goes back to 1272. The firs considerable development took place in 1490, when the castle was fortified to resist Habsburg raids.

When Buda was occupied by the Turkish in 1541, Csobánc gained a key role in defending the new borderline. Its importance was further enhanced in 1561 by the Turkish occupation of Hegyesd Castle nearby. Next year Hungarian troops set off to recapture Hegyesd from Csobánc. The legend has it that before the siege, castellan László Gyulaffy (aka the Hungarian “Achilles”) beat the Turkish castellan of Hegyesd in a duel. It truly demonstrates his strength that he stabbed his lance into his opponent so hard that it not only punctured his armour but even the pennon got through his body and an axe was needed to remove the weapon. Later on, he was forced to use an alias to fight duels as nobody dared to take the challenge. Turkish troops attempted to capture the castle of Csobánc more times, with no success.

In 1669, the stronghold was purchased Pál Esterházy. In the 1690s, Ádám Béri Balogh did his military service here, who later became a legendary general of Rákóczi’s War of Independence. Following the expulsion of Turks, the Habsburg court decided to destroy the castle. This plan was disrupted by the start of Rákóczi’s war. Until 1705 the castle was controlled by the Habsburgs, when Hungarian troops captured it. The most glorious day in the history of the castle was February 25, 1707, when around 1,000 Habsburg troops were repelled by 60 defenders (30 soldiers, 30 refugees). They were not only heavily outnumbered but outgunned too. The Habsburgs suffered a casualty of 400 men. Habsburg General Rabutin took revenge by burning down Csobáncszög. Finally, the Habsburgs recaptured the castle and exploded it in 1709. Today the names of the defenders are displayed on a memorial plaque at the ruins.

In 1953, an archaeological excavation took place and some pieces of renaissance style door and window frames were preserved. A new chapter in the story of the decaying ruins began in 2003, when inhabitants of Gyulakeszi established the Foundation for Csobánc Castle and László Gyulaffy Historical Society. Enthusiastic locals have been contributing to preserve and develop the castle to bring back some of its old glory.

The trail begins a descent but continues to offer a stunning view. In the north, you can spot the signature hill of Hegyesd mentioned before and the stand-alone peak of Somló Hill in the distance, the “stray sheep” of the area. In the north-west, it is easy to recognize the castle hill of Sümeg. After cold fronts, you may even spot Schneeberg in Austria. The view to the west is more or less closed by Keszthely Mountains.

Take a pause at the first curve of the switchback to check the view again from the rock formation called Szénaeregető. The trail continues to descend and arrives at a ruined church.

This is the one-time church of Csobáncszög. It was built in the 13th century and later it was extended. The current walls have their origin mainly in early modern period, only the foundation wall of the nave and a few rows of stones are medieval. The 1950s was neither very mercifuld to the church as its owner built a wine press house in the shrine and dug a cistern in the nave.

The church used to belong to the village of Csobáncszög. Only a little is known about its early history. It was supposedly owned by landlords of Gyulakeszi. In the 15th century, the village changed hands more times. As a property of the Gyulaffys it had developed into a market town. Even in the early 18th century it was mentioned as a “splendid town” in a geographical survey of the country by Matthias Bel.  It was probably abandoned past the Habsburg siege a little later, when inhabitants moved to Diszel.

Follow the Green (Z) markers. You will pass two ancient Cornelian cherry trees guarding the hollow track at Csóka-vár cellar, where you can find another Kalligaro well right next to.  Soon you will get back to the cross you passed at the beginning. Head right to return to Gyulakeszi. 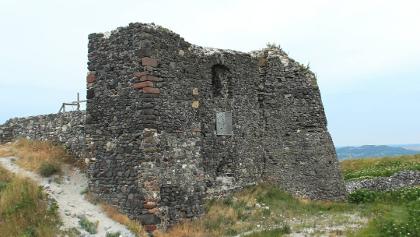 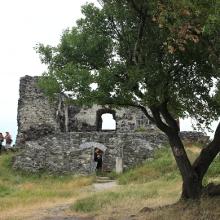 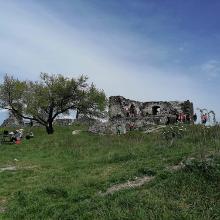 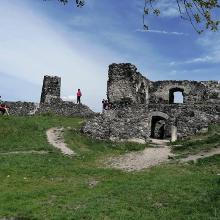