A diverse tour taking us to popular and less known parts of South Börzsöny, with several lookout spots where we can enjoy the Magas-Börzsöny panorama with its characteristic hills and the exceptional beauty of the Danube Bend.
open
moderate
18.3 km
5:13 h
523 m
547 m

It is not an accident that the Danube Bend is one of the most popular trekking destinations of Hungary. This unique environment is visited by many during the weekends: Some go by car, some take the tourist boat and others choose to cycle there, but if we want to see all the beauty it offers, we will want to explore it on foot. This 18-km-long tour leading from Kismaros to Nagymaros will take us to some less known lookout spots of the Danube Bend, introduces the diverse landscape of South Börzsöny to us with its gentle slopes and romantic wilderness, and not only reveals the beauty of nature, but some historical curiosities as well.

The overall ascent of the route is just over 400 metres, and we will mostly walk on conveniently wide dirt roads - but it will lead us to the most beautiful parts on smaller paths with a unique atmosphere. It is well worth abandoning our original route every once in a while for a stunning panorama, a historical curiosity or some refreshments in the guest house of Törökmező. And the cherry on top could be a nice swim in the cool water in Nagymaros if we take the tour in high summer, or any other relaxing and entertaining activity of the many that the town offers us after a day of walking.

A few short sections of the route are steep and difficult to walk on. In dry weather the gravel might crumble and roll off under our feet, and on rainy days the slippery mud might make our hike difficult on the steep path. Be careful, and always check the weather forecast before leaving for this tour.

Our fairly easy, 18-km route starts on a wide dirt road from Csattogó Valley at the foot of Börzsöny. We follow the characteristic yellow markings of Via Margaritarum (a pilgrim road) symbolising a rosary in the direction of Kismaros until we reach the main road of the municipality leading to Szokolya. It runs parallel to the tracks of the Királyrét Forest Railway, Morgó Creek and also the green (Z) trail for a while, which will be the route of our tour. We do not have to walk on paved roads for long: The markings at the foot of Nagy-Morgó lead us onto the hillside, and thus the first steeper ascent of our tour begins initially in a weekend house area, then along the trench of a power line. We cannot entirely relax after the steep section, as we will continue uphill on the ridge, even if on a slightly gentler slope. The gardens and houses along the road give us a mixed impression. Some of them are well maintained, but many of them are in a very bad condition and are a sore to the eye.

Watch out for the marking of the green triangle (Z▲) trail on the left hand side of Kilátó road. Following this trail adding an extra 400 metres to the tour to visit the Nagy-kőszikla lookout spot, we can enjoy one of the less known panoramas of the Danube Bend.

Whether we chose this option or not, we keep following the green (Z) trail on the wide dirt road, passing through the 377-metre summit of Gál Hill hardly noticing it. There is so little ascent in this section, that only the geodetic altitude marker signals the highest point of the ridge. From here, there is a steady descent ahead of us on a land where Kálmán Kittenberger, the famous hunter and Africa explorer used to hunt. There is still a hunting stand that was built by him more than 60 years ago in the thicket left of our route as we go northwest. We can also find a memorial sign of him here. And the secluded Rózsa Hut is not far from here, where Kittenberger spent many long days with the famous writer and his best friend, István Fekete. Following the green (Z) then the red cross (P+) trails, we will not visit these places, but if we have read the hunting stories of István Fekete, we will sure recognise some of the Börzsöny scenes.

The red cross (P+) trail leads us to the enclosed Toronyalja Fishing Pond and the red (P) trail, as well as Bibervár. Now a ruin more than anything, the fortification used to be a watchtower (despite its name referring to a “castle” in Hungarian), but very little is known of the origins of its name or its history. There is no information on the exact time Bibervár—also known as Pusztatorony—was built, but presumably it was already standing at the end of the 12th century. Based on the archaeological findings of the area, the little fortification consisted of a living tower and a small, connecting yard, and there was a small settlement directly next to it, possibly called Toronyalja. There are only guesses as to its demise as well, but probably it was demolished at the beginning of the 14th century in an attack during the anarchic times following the end of the Árpád Dynasty in 1301. We can visit the remaining ruins of the walls only a few metres off the red (P) trail before we head for the Kóspallag highway in a short but steep descent.

The Paulist monastery of Toronyalja

After crossing the asphalt road south, first we walk on a wide waggon road, then our way continues on a small path cutting through the tall grass. Before reaching a romantic stream valley, we can see a small, steep hillock on our right hand side. Once the Paulist monastery of Toronyalja stood there, but today only the stones lying around and a well reminds us of the monks that used live and pray here.

The Saint Michael Paulist Monastery, that used to belong to the vicar of Márianosztra, was presumably established at the turn of the 14th and 15th centuries, most probably also reusing the stones of the demolished Pusztatorony to build it. The first written documentation of it dates back to 1437, although there are some sources mentioning the chapel and its patron saint from 1381. According to research, the first chapel of the monastery had a buttressed apse closed on three sides of an octagon, which was later expanded. The building of the monastery was attached to the north side of the chapel, but today only the place of the walls can be discovered here and there in the thick undergrowth. The monastery also had a mill and a fishing pond, and numerous items were found in its 20 metres deep well: wood handle knives, a sickle, waggon parts, a padlock, two anchors and a tin jug, among others. The desolation of the monastery walls and the area probably happened at the time of the Ottoman invasion, directly after the fall of Buda and Esztergom. It is only an extra 50–100 metres from the red (P) trail to visit the forgotten ruins, provided that our inner explorer can be satisfied with visually less appealing historical curiosities as well.

Following the steep side of the valley and the winding creek, our path leads over fallen trees and thick undergrowth to Békás Meadow. The widening, open space welcomes us with a gentle, pastoral landscape, with a panorama of the higher ranges of Börzsöny to the North. We reach the asphalt road leading to Törökmező after crossing the meadow. Turning right, we walk a few metres on the asphalt, but then continue our way parallel to it on a forest trail.

We arrive to Törökmező and its distinguished guest house. And it has more to offer than mere refreshments. The tourist centre that was recently upgraded with an adventure park is primarily targeting student groups, but anyone in need of a little rest can enjoy its pleasant environment.

We keep following the red (P) trail on easy, almost level terrain. Walking under the shade of trees, our path meanders near the forestry road all the way to the edge of the hills of South Börzsöny. At the asphalt parking lot we switch from the red (P) trail to the green triangle (Z▲) trail. We climb the 360-metre Gubacsi-hálás on this rocky and sometimes slippery path, from which we will have a chance to enjoy the view of the Danube Bend, the Visegrád Hills opposite us and the famous citadel on top of it, this time without leaving the route.

Another lookout spot from Köves Field

Our path meanders on the steep ridge of the hill covered by trees, mostly blocking the panorama, unfortunately. But we have no reason to lose heart, there are plenty of stunning visual experiences ahead of us, we just need to reach the open Köves Field first. And we will do that following the National Blue Trail that is about to join our path from the depth of the hills on our right hand side. The blue (K) trail will take us south (to the left) through the hayfield. After a couple hundred metres, we reach Köves Field, then following the blue triangle (K▲) trail, we are about to arrive at a resting stop complete with panorama. The natural lookout spot equipped with benches offers us a new angle to look at one of the most beautiful landscapes of the country. Stop here for a moment before setting out on the last section of the route taking us back to Nagymaros below us.

The blue cross (K+) trail is definitely the shortest way to the town, but to be honest, it is far from being the most scenic one. The defile used for illegal waste disposal by the locals is littered with household waste, construction waste and old tyres all over, which are huddled into clusters by the heavy rainfalls. It is best to avoid this section in rainy weather and to choose an alternative route parallel to it.

After we make our way down to Nagymaros, it is up to us how we wish to conclude the tour. The bank of the Danube is accessible all year on the joined blue (K) and red (P) trails, but obviously, the area is most vibrant during summer, when we can even take a refreshing dip in the cool water of the river. We can celebrate the end of a day full of exploration on the beach, in a restaurant or at a snack bar. We can get home easily using the excellent public transportation of the area. Trains are leaving for Budapest hourly from the Nagymaros-Visegrád train station, but we can also choose to cross the river on a ferry and take a bus home from Visegrád. 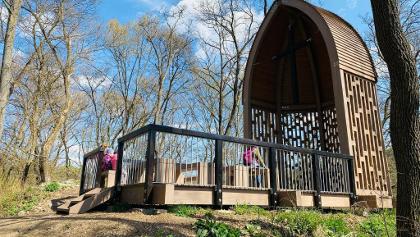 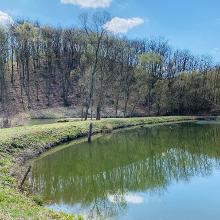 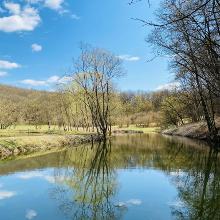 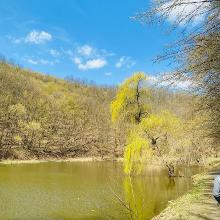