This section leads deep into the forests of Visegrád Mountains and gives a sense of the character of North Hungarian Mid-Mountains. It is a member of the volcanic Carpathian Range, once higher than 1300 meters. The volcano has greatly eroded over millions of years and today it is a densely forested mountain with valleys in radial arrangement.

Although Visegrádi-hegység (Visegrád Mountains) is neither very extensive nor very high it hides varied landforms. It is the dark andesite rocks, deep gorges, creeks with cascades, the view over the Danube Bend and the chain of volcanic peaks that account for its unique character.

From Dobogókő there is a view over the volcanic teeth of Vadálló-kövek (Vadálló Rocks), Szent Mihály-hegy on the other side of the Danube, which used to belong to Visegrád Mountains. Leaving Dobogó-kő behind the trail ascends into the inner part of the forest, skirts the basin of Sikárosi-rét surrounded by hills and follows the valley of Bükkös Creek to arrive at Pilisszentlászló, the only settlement of the inner Visegrád Mountains. Past the village the trail climbs to the foresters’ lodge at Pap-rét on a saddle.

The last part of the section traverses the northeastern ridge of the mountain with uninhabited intact forests and grassy meadows. Finally, the trail arrives at a little plateau over Visegrád with a view over the densely wooded hills of High-Börzsöny on the other side and begins a descent to the Danube passing the Citadel of Visegrád.

An unmatched view unfolds beneath your feet from the terrace of Dobogó-kő over this ancient Carpathian volcanic area. Börzsöny and Visegrád Mountains were formed by the moving of tectonic plates beneath the Carpathian Basin. Szent Mihály Hill on the opposite side of the Danube also belongs to Visegrádi Mountains, although separated by the river. Other signs of volcanic activity, such as the rocks of Vadálló-kövek and Rám-szikla also greatly contribute to the landscape.

Past Dobogókő and the ski slopes (with a view over the rock of Prédikálószék) the trail enters the woods ascending to the valley of Bükkös-patak. This is the longest creek of the mountains feeding the Danube at Szentendre. The name of Öreg-vágás-hegy (Old Cut Hill) could refer to an old clearance or clear-cut but it does not. It commemorates a murder in the mid-19th century when an old soldier was killed and robbed by a local man while resting on his way home after the war of 1848/49.

The trail follows the creek and reaches Sikárosi-rét with a forester’s lodge (stamper on a tree).

Cross Bükkös Creek and follow the narrowing valley. The creek meanders at parts of a greater width by eroding sediment on the outside of the curves and dropping it on the inside of curves. This is because the water moves fastest on the outside of a turn. Water does this because it tries to find the path with the weakest resistance avoiding its own deposit. The trail turns left and leaves the creek to continue along Öreg-nyílás-völgy. Crossing the creek and a paved road you will soon pass a little wooden bridge and arrive at the outskirts of Pilisszentlászló (stamper at the Kisrigó Restaurant, another in the pub in the village center, a third at Janosiková pub).

Pilisszentlászló is the only village in the inner part of the mountains with a population mostly of Slovakian origin. Exit the village through the main square and hike steeply uphill to the meadow of Szarvas-szérű. Continue along the forestry road to Pap-rét (Priest’s Meadow). The trail makes a shortcut through a hillside and returns to the road at Pap-rét (stamper at the forester’s lodge).

Here starts the most special part of your hike in Visegrádi Mountains, occasionally with Carpathian character. Head east and hike through the sweet clearances. At a junction the trail turns north and begins a relatively level traverse on the side of Urak asztala through the dense beech forest. The top of the mountain hides a decaying abandoned military base. Unfortunately, the forest was partly devastated by the weight of glaze ice in December, 2014, although these clearings provide additional views over the mountains.

After a lengthy hike remote from inhabited areas and roads the trail reaches the picturesque clearing of Vízverés nyerge.

Climb over the fence and continue to the meadow of Barát-halom with Moli-pihenő (picnic spot). It boasts a wonderful view over the Danube Bend and the dense forests of Visegrádi Mountains. The name of Bölényes Hill nex to commemorates the failed attempt during the 20th century to re-establish bison population.

The trail begins a steep ascent. At the bottom of a dark slope some light on the left signals an andesite rock (Borjú-fő) with a lookout point.

You may still feel civilization remote, but it is closer and closer. The trail passes the wet meadow of Sóstó-rét and follows a logging track along the hillside to arrive at the plateau of Tabán. Take a pause here to make short detours for various views. Leave the trail to the left to explore a meadow behind the trees, or climb to Zsitvay lookout tower on Nagy-Villám (stamper at Nagy-Villám restaurant).

Past the paved road hike downhill towards Visegrád. Take your time to visit the Citadell. The trail passes the baroque style Kálvária Chapel, which was attached to the brecca wall. Once you arrive down at Visegrád the markers lead you to the ferry port (stamper on a utility pole at the terrace of the restaurant near the port). 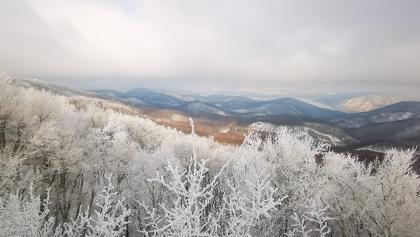 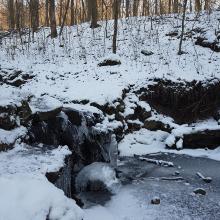 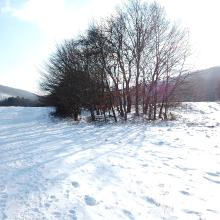 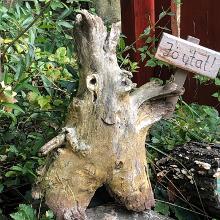