A wide forest trail (and interactive nature trail) levelling at 370m on the slope of Hármashatár-hegy. It offers a pleasant walk inside the city but still in a natural forest environment.
Open
easy
Distance 6.1 km
Duration2:00 h
Ascent104 m
Descent148 m

The steep northwestern slope of Hármashatár-hegy is crossed by a wide path. Invisible from below as it runs under the shady canopy of trees. The trail with long and straight sections does not offer imposing vistas, although you can enjoy occasional views over Budapest and two lookout terraces provide some compensation. Besides a few rock formations it is just the dense forest that accompanies hikers, but this is exactly what makes Guckler Trail worth completing. The trail includes an interactive nature trail with 14 stations where further information is available about local values of nature and the history of Óbuda through QR codes. For the 100th anniversary of opening the trail it was restored in 2018.

The eponym for the trail, Károly Guckler was the forest manager of Budapest from the end of the 19th century. He made an invaluable contribution to reforesting Buda Hills to replace devastated vineyards past the phylloxera epidemic and rehabilitate hillsides after their clear-cut for firewood. At the dawn of tourism locals expressed dissatisfaction with barren slopes that they saw when exploring nature or building holiday houses. This encouraged leaders of the city to start a reforestation programme managed by Guckler. Besides beeches, mainly pines were planted to stop soil erosion and facilitate the formation of a new layer. As a part of this project a trail levelling across the steep slope of Hármashatár-hegy was established. During this trip you will hike along this trail, although not until the end as it continues outside Budapest across the slope of Csúcs-hegy.

The iconic Fenyőgyöngye Restaurant opened in 1935 and has fulfilled its original function ever since. Its name refers to the planted pines of the area. Start your hike here with an ascent to Hármashatár-hegy along the Blue (K) trail. The path parallels to the paved road winding uphill: Right before a sharp left turn of the paved road the trail crosses it and continues straight on the other side. You will soon arrive at a junction where change to the Green + (Z+) trail to the right and cross the road again.

Here is where the ascent ends and Guckler Trail begins levelling along the slope of the hill. Boards of the nature trail provide information on local natural values and the history of Óbuda below. At certain points retaining walls help to maintain the wide path against the steep slope. Occasionally, the canopy of the trees allow for a view over the city way down below.

From the right the Green Ω (ZΩ) joins in coming from Tábor-hegyi-barlang. In around 300 meters just past the curve around the hollow of Kis-Farkas-torok an observation deck offers a view over Budapest. The pipes placed there do not magnify just direct attention to certain sights.

Approaching the hollow of Nagy-Farkas-torok more or less obstructed views open over the city. The trail passes another observation deck and a lengthy straight section follows. The rock formation on the left at a resting spot bears the name of Guckler (Gückler-szikla). It is made up by dolomite blocks cemented together and rolled down the slope to its current location.

The next section of the trail has been much more affected by natural processes. It gets narrow at places, and the devastation of glaze ice in 2014 left more visible traces. Finally, the slopes on your sides get mild and the trail arrives at Virágos-nyereg (Saddle of Flowers).

Back to the city

It is a saddle between horsts with a junction of more hiking trails, and this is the point of return in your hike. Change to the Blue + (K+) trail to the right heading backward along a narrow path. The trail enters the woods and begins a descent paralleling to a dirt track. Following the mild ascent you will arrive at the end of Erdőalja Street on the outskirts of Budapest. In around 1 km along the street your hike ends at the bus stop.

No special equipment or boots are needed. 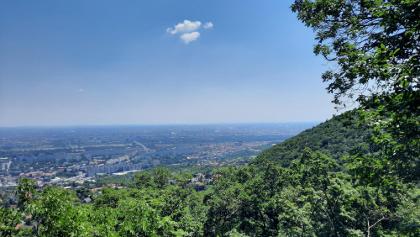 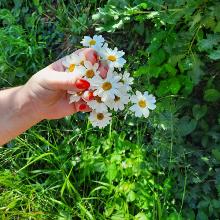 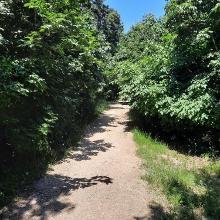 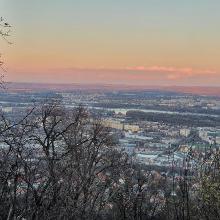