Easily accessible lookout tower inside Tihany Peninsula with a view over the crater of the former volcano and Balaton. A truly memorable experience near Balaton Lake.

The lookout tower sits on the edge of the former volcano crater offering a view of various remnants of past volcanic activity. The two shallow lakes (Belső- and Külső-tó, Inner and Outer Lake, respectively) are reminders of the exploded volcanic crater, although the exact way of their formation is unknown. Külső-tó partially fills the main crater covered with a field of reeds home to rich bird life. This has not always been so. In the 19th century extending agriculture was a higher priority so draining began through a canal. Fortunately, at the end of the 1970s conservation authorities took control and restoration started by closing the canal. The dark blue lake with a larger open water area (Belső-tó, Inner Lake) strikingly contrasts against the bright green colour of Balaton in the background. It also lies in the volcanic caldera and currently serves recreational purposes, such as angling and boating.

From the lookout tower you can see streets of Tihany, the Abbey, the wooded landscape on the left behind the bay is scattered by roofs of Balatonfüred, Csopak and Alsóörs. In clear weather, even Kőris-hegy, the highest peak of Bakony is visible in the north. Behind the hills of the peninsula in the west the view is dominated by Balaton and in the south you may spot the Kőröshegy viaduct on the other side. 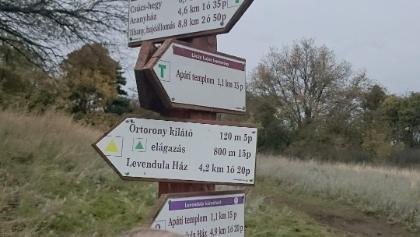 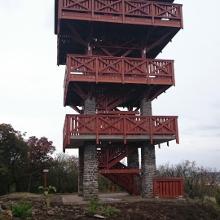 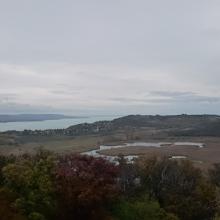