It would be challenging to find a better spot for a lookout tower in Balaton Uplands than the highest point of Badacsony. The top level offers a nearly unobstructed view over a full range of the greatest natural beauties of the area.

The lookout tower of Badacsony added 18 meters to its height of 438 meters in 2011. The current lookout tower replaced a decaying old one built in the 1960s. The mixed material design includes a steel core with the stairs and a wooden cover outside resembling a giant vase or sandglass.

The 360 degree view is just a little obstructed by trees and photos mounted on the parapet help to identify components of the landscape. The tower has an excellent location to show various landscapes at the same time. We can see the majority of Balaton from Tihany to the Bay of Keszthely with a row of villages on both sides of the lake. Turning around the whole Káli Basin and Tapolca Basin stretches in front of us with its signature buttes and tiny villages. Buttes are mementos of volcanic activity. The ones with a flat top, such as Badacsony, Csobánc or Szent György-hegy have their origins in basalt lava flows.  Basalt lava has a low viscosity, due to its low silica content, resulting in rapid lava flows that can spread over great areas before cooling and solidification. The solid lava forms a protective shield that resists erosion thereby maintaining and demonstrating original surface level. However, the pyramid-like hills with a pointed peak, such as Gulács are not results of lava flow but that of magma stuck in the vent.

Open all year round 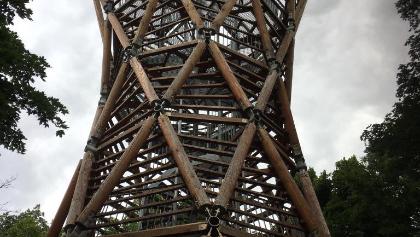