The castle was built atop a sheer cliff above Szarvaskő. Unfortunately, only a little is left of the original castle today, but the peak rewards hikers with a beautiful scenery for their efforts.

On the western edge of Bükk, the Castle of Szarvaskő used to sit 300 meters high on the top of a steep, grim cliff in the gorge of Eger Creek. The origin of its name is unknown, but according to legend, during a hunt dogs chased a stag up to the peak, which then threw itself into the depths below.

As with several other castles of its time, the building of this castle was ordered by King Béla IV to reinforce the defense of the country and provide shelter to its people after the Mongol Invasion. According to documents, the king allowed the bishop of Eger to build the castle in 1248. The rock was called “Kerekkő” (Roundstone) at the time. The castle was built only in the second half of the 13th century; however, it had no strategic importance, and was mostly in use at times of hunts and feasts. Several nearby settlements belonged to the castle and serfs paid their taxes to the lord of the castle. By the end of the 1400s the village took on its final form, originally called Szarvaskő-alja later became shortened to Szarvaskő. Since the fortification belonged to the Castle of Eger, the guards shifted weekly and received food for the week in their satchels. This is why outposts with only a few guards were called “satchel castles”.

There were constant arguments and legal claims regarding the castle and its profitable estates in the 16th century. By the time of the Turkish conquest, it came under the command of the castellan of Eger castle, the Hungarian hero, István Dobó. While Eger withstood the Turkish siege, Szarvaskő stood with it, functioning as lodgings for messengers, even though the population started to flee. When Eger fell in 1596, the castle of Szarvaskő – much like the castle of Sirok – fell without a blow, since, seeing the overwhelming numbers, the Hungarian defenders fled.

For nearly a hundred years the Turkish ruled the castle and the pass. When the castle was reclaimed in 1687 with the lead of an Italian marquis, the remaining Turks took up the name “Szarvaskői” and converted to Christianity.

The bishop of Eger, who supported Rákóczi, spent his exile in the castle before the pope placed him back into office. By the start of the 18th century, the castle lost all of its strategic importance and started on the path of decay. Castle stones were scavenged by locals for their own use.

The weather-beaten facade still stood in 1910, while a part of a wall with two windows and one door was intact until 1931. Those parts of the castle surviving until the 20th century gave way to decay and fell; the only sections reminding us of a once-important fortress are some base walls, the remains of a tower and the moat. A Hungarian flag stands in the place of the original wooden cross at the southwestern part of the cliff. A new cross has been placed on the opposite side in memory of the Saint Nicholas chapel and the bishop who once lived here. Based on the ruins, the area of the castle was 68 meters long and 14-26 meters wide. Scholars assume it had two gates, and documents of that time mention a multi-level basement, one larger and one smaller tower, some residences, a kitchen and a prison.

The peak now hosts a lookout tower, providing a magnificent view of Szarvaskő among the hills and the nearby hills and mountains. There have been no archeological or restoration works at Szarvaskő. The village has plans to search for funding for these.

The cliff upon which the castle stood is part of the Bükk National Park and is the habitat for several endangered plants. The Blue \ (K\) nature trail of 11 stations guides you from the village center to Várhegy via Akasztó-hegy and Major-tető (nearly 10 km). 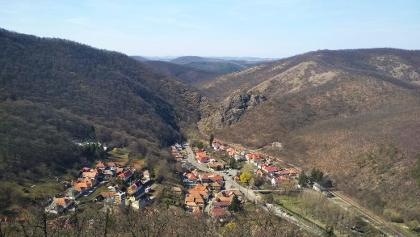