This special lookout not only connects two countries but the longest continuous hiking trail in Europe, the National Blue Trail and the Pál Rockenbauer Southern Transdanubian Blue Trail winding to Szekszárd also.

The name „írottkő” (marked stone) may be associated with the peak, the bastion-like lookout or the eponymous rock formation, but any of them are well-worth the effort of hiking up there.

Írott-kő, the peak of peaks

Írott-kő is not only the highest peak of Kőszegi-hegység (Kőszeg Mountains) but that of Transdanubia and Burgenland, too (883m). Scanning the landscape from northeast to southeast we may admire the scenic view of Austria on the left and that of Hungary on the right. The two countries used to be separated by the Iron Curtain and the landscape still bears some conspicuous traces of it.

Documents from the 14th century name the mount as Pine Peak, referring to the dominant pine groves of the area, however, 300 years later it was renamed as Szálkő.

Around 40 meters from the lookout, on the Austrian side of the border there is a rock formation with inscribed letters of “C”, “B” and “E” indicating the border of lands owned by the town of Kőszeg, the Batthyány and Esterházy noble families. The German name of the peak “Geschriebenstein” also refers to this origin.

The first lookout at the peak was made of wood by the Hikers Association of Kőszeg and remained until 1909. A little later, in 1913 a new tower was built of stone and has been open to visitors since 1990.

The peak and the lookout lie exactly on the Hungarian-Austrian border. The entry to the tower is on the Austrian side but it is accessible along hiking trails from both countries. Formerly, until the Iron Curtain was demolished, the fence ran on the Hungarian side thus making the tower approachable from Austria only.

The observation deck on the top provides a panoramic view, which, in clear weather includes Fertő Lake in the north/northeast, also shared by the two countries, the blue surface of Balaton Lake in the southeast and the Alpine scenery of Schneeberg and Rax in the northwest.

open today
Open all year round.

Hiking all along the longest continuous trail of our country is a great challenge and a great opportunity to learn about rural Hungary. 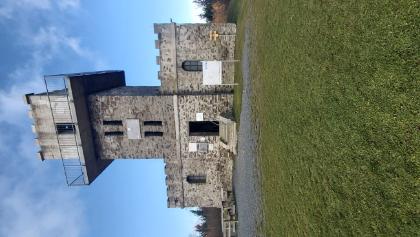