Sitting at the highest point of Budapest the iconic lookout tower offers a memorable view over not only the capital but the surrounding hills too.

Observing hills of Buda from the city by night an impressive building shining in gold catches the eye on the hilltop high above every other source of light, breaking the darkness of the hillside forest. In the daytime its white building stones make Erzsébet lookout tower even more striking to the eye.

The tower rewards visitors with one of the most beautiful views over Buda Hills. You can identify several signature buildings and streets of Budapest even with the naked eye. The beauty of the view comes from the gradual blending of urban and natural environment: the blanket of buildings merges into green areas on the Buda side and finally transforms into wooded hillsides. Behind Hármashatár-hegy with its signature telecommunications towers you can clearly see Pilis Mountains and Visegrádi Mountains, and even peaks of Börzsöny in the distance. Beyond lower arms of Buda Hills the view extends to Gerecse Mountains in the north and Vértes Mountains in the west. In the southeast the range of Velencei Mountains are visible and to the left of it chimney stacks of the power plant in Százhalombatta are fuming. To the northeast you can even see the twin-peaked Szanda Hill in Cserhát Hills and the volcanic ridge of Mátra with Kékes-tető (the highest peak of Hungary at 1014 m).

Being a horst with steep slopes János Hill rises over surrounding hills, which accounts for the exceptional view from here.

The building itself truly matches the exceptional character of the hill. The classic spiral stairs lead to four observation decks. The Neo-Romanesque tower sits at 527 m on János Hill and rises to 23.5 metres. The idea to replace the old wooden tower with a more impressive one dates back to 1885, however, due to high costs the construction was long delayed. Finally, on the initiative of the Hungarian Hikers' Association and personally Frigyes Glück, the necessary fund was raised by the Guild of Hungarian Hotel Owners and the municipality of Budapest as well as donations by local residents.

Engineer Pál Klunzinger was assigned to make the plans, which was judged  by renowned architect Frigyes Schulek (also Head of Department at Technical University). Construction began only in 1908 and after a redesign of the upper levels by Schulek the building was completed in 1910. It was made mostly of freshwater limestone. The eponym of the lookout tower, Empress Elisabeth, who was an exceptionally popular member of the Habsburg Dynasty in Hungary, had visited János Hill more times before and highly appreciated the view from there. Interestingly, the lookout tower was the first building to get architectural lighting in Budapest, setting a precedent for the Parliament Building and Fishermen's Bastion.

In the beginning, the tower was home to a weather stations and a guard resided there too (in 1923 a separate building was constructed for him). The terrace with benches was completed only in 1931 and the surrounding environment was also landscaped. During the Socialist era an illuminated red star was placed on the top, which led to structural issues. Although it was removed after the political changes the decaying building was well in need of a renovation, anyway. Finally, this took place between 2001 and 2005 when the current decorative stone cover and lighting was made. While downstairs functions as a coffee shop, the next level hosts an exhibition on the history of the lookout tower.

(Officially, "open from sunrise to sunset".)

from Edvárd Rózsa,   Magyar Természetjáró Szövetség
Show all on map 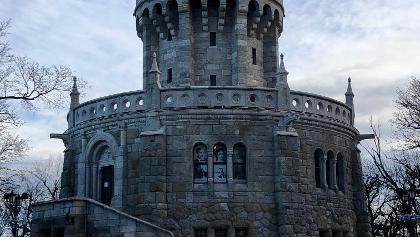 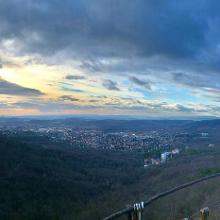 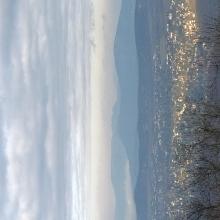 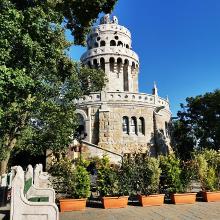