Responsible for this content
Magyar Természetjáró Szövetség Verified partner  Explorers Choice
Gábor Fekete
on the May 01, 2021

These strange rock formations have been standing immovable in Velence Hills for millions of years, though they seem to be balancing atop each other and just about to collapse. In fact, they are quite stable, some of them tempting visitors to climb them both for the challenge and the view.

On the southeastern side of Transdanubian Mountains mostly made up by Mesozoic sedimentary rock Velence Hills was formed earlier, in the Paleozoic Era. Consequently, this makes the hills with reddish basement rock the oldest geological region in the country. Moreover, Velence Hills is the only location in Hungary with granite outcrops.

Its specialness comes from being one of the two granite rock masses (the other is the rock mass of Mórágy) in Hungary and the only one with typical granite outcrops. Shrinking of magma cooling off underground led to cracking, which caused the rock mass to break into large and square blocks. In the meantime, overlying rock had eroded and these blocks got closer to the surface. This process helped oozing water to reach and round the blocks by weathering and further surface erosion brought these formations to the surface. These balancing rocks are still being shaped by forces of nature, however, it is hardly visible with the naked eye.

The most spectacular granite rocks sit on the slope of Sár-hegy above Pákozd, mostly on the brushy rolling plateau. Hiking from south to north the first well-known rock formation is Pogány-kő (Pagan Rock), a natural lookout point made up by several amorphous blocks piled up. It is safe to climb and offers a great view over Velence Lake. It is famous for its old and new graffiti including Cyrillic notes from times when the area was used as a military exercise field by the Soviet troops. The next formation on the right side of the road is called Oroszlán-szikla (Lion Rock), quite overgrown but its signature shape is still visible.

Further to the north, perhaps the best-known balancing rock sits called Kocka (Cube). The middle piece of the formation seems to be challenging gravity, hesitating which side to fall.

Following the Yellow ▲(S▲) markers from the Cube, in 300 metres,, just a little off the road, you will reach the most impressive formation of the hill. Pandúr-kő (Cop Rock) is a collection of huge stone bags rising above the trees. You can safely enjoy the view over the surrounding area even from the lower blocks but beware of the steep ground with slippery debris around.

Sár-hegy offers some more nameless formations, however, the solitary Gyapjaszsák (Wool Bale) formation, east of Sukoró, by the biking route along Nadapi Street is well worth a visit, also because of the view over the lake.

The 44-hectare area of balancing rocks was the first geological site in the country to gain a protected status in 1951.

from Ferenc Szigeti,   Együttműködő szervezetek
Show all on map 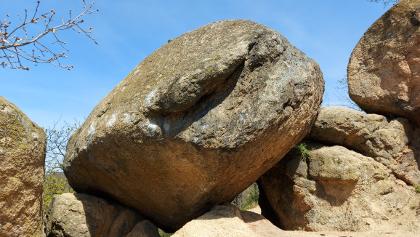 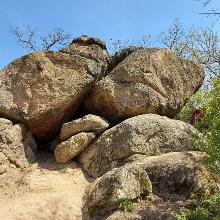 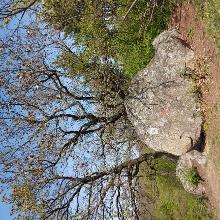 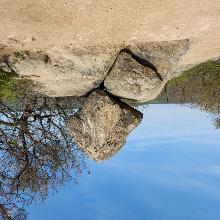