Responsible for this content
Magyar Természetjáró Szövetség Verified partner  Explorers Choice
Szilárd Szabó
on the May 30, 2020

The picturesque view of the castle and its reflection in Öreg-tó (Old Lake) of Tata have amazed visitors for 700 years. Although it never played an important role in military history, rulers of the country had always paid special attention to the fort and the town. Only a few are aware that the current building hosting Domonkos Kuny Museum is just one fourth (the southern wing) of the former complex. It displays a medieval stone collection and the Knights' Hall. You can get a sense of what the place was like in the hands of the Esterházy Dynasty and visit the colourful Roman Room.

The castle used to serve as a preferred retreat for kings and aristocrats. It was owned and developed by kings of Hungary (Sigismund of Luxembourg, Matthias Corvinus, Vladislav II) and later by the wealthy Esterházy Dinasty. The original stronghold was most likely built by the Lackfis in the 14th century. Palatine Lackfi, lord of Tata is renowned not only for building the castle but a historic legend of his conspiracy against King Sigismund. As his plans were revealed beforehand traitors himself included were massacred by the king's loyal men.

Afterwards, King Sigismund fell in love with Tata so much that he kept it for himself contradicting the common royal policy of bestowals. A few years later, in 1409 the new castle based on the former stronghold was completed on the shore of Öreg-tó (Old Lake) resembling Italian forts and measuring around four times bigger than what remained. The town enjoyed a glorious heyday those times.

Extensions by Matthias Corvinus, such as terraces, cloisters and the barbican turned it into a true Renaissance castle.

Despite being reinforced in the 16th century as part of the Transdanubian defence line, unfortunately, it fell into the hands of Turkish troops.  It was recaptured in 1597 by a clever stratagem. Two Hungarian soldiers dressed up in Turkish clothes parked a grain wagon at the gate with a bomb hidden under the grain. As night fell the bomb, which was a bell filled with gunpowder, was exploded destroying the gate. Captain Miklós Pálffy took advantage of the panic and occupied the fortress.

Further fortifications were conducted during the 16th century when a moat was built around the castle and was filled with water from the lake. Perhaps this is what accounts for the partial survival of the building when Grand Vizier Kara Mustafa tried to blow it up in 1683. After changing hands several times as well as a devastating fire the decaying castle passed into the hands of the Esterházy Dynasty in the early 18th century. They demolished the ruined parts and kept only the southern wing.

Although more generations of the family had ambitious plans of building, no large-scale construction projects were carried out. Developments, such as changing windows to Gothic style, remodelling the gate and the bridge as well as building a tower on the chapel wall mostly affected the exterior and resulted in a more picturesque appearance. Originally, the monumental Matthias Fountain in Buda Castle by sculptor Alajos Stróbl was also meant to decorate the castle in Tata, however, its owner-to-be, Earl József Miklós Esterházy died before paying for it.

Between 1964 and 1973 archaeological and restoration works were conducted, which continued in 2017 as part of the National Castle Programme.

The castle has been home to Domonkos Kuny Museum since 1954. One of its must-see attractions is the "Roman Room". The colourful room is a restored part of an Ancient Roman villa in Brigetio (Szőny, Hungary) from the 2nd century, where fragments of the original wall paintings were used like jigsaw pieces to decorate the walls and the ceiling. The museum also hosts a lapidarium with carved lions and other beasts, rooms presenting life in Tata during the Esterházy period and a Knights' Hall with Renaissance furniture.

Hike around the Old Lake of Tata and explore its secrets in any season. Changes in water level reveal various faces of this idyllic habitat. 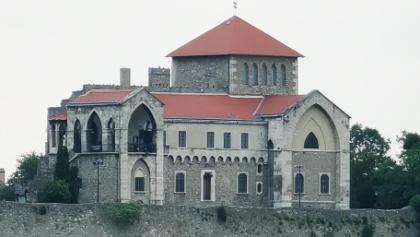 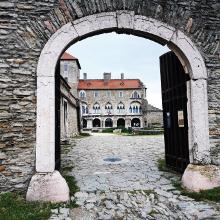 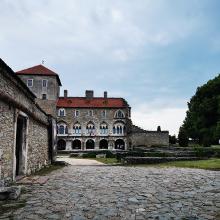 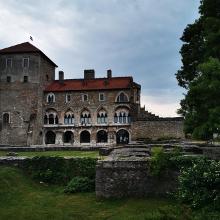 Hike around the Old Lake of Tata and explore its secrets in any season. Changes in water level reveal various faces of this idyllic habitat.