The Castle of Füzér built in the 13th century sits 552 meters above sea level among the hills of Zemplén Mountains. Its historical importance is emphasized by the fact that Péter Perényi, protector of the Crown, brought the Crown of Hungary here after the defeat of the Hungarian armies at the battle of Mohács.  The castle was renovated by 2016: the outer bailey rebuilt, the chapel, the keep and its lower bastion reconstructed. Visitors can get to know the history of the town at a visitor center nearby.

The fortification built atop a volcanic mountain above Füzér is one of the first of its kind built in the Arpad-era. After changing hands several times, it was built into a multi-level castle, equipped with –at the time – modern defenses in the middle of the 15th century. Among its owners were the widow of the famous defender Nádasdy Ferenc, Elisabeth Báthory, who was rumored to have bathed in the blood of virgins to uphold her beauty – recent research disproved the legend. After changing owners multiple times, Habsburg soldiers burned it to the ground to prevent its use by rebels, and it lost its strategic importance.

In 1903, Géza Wittich proposed the renovation of the fortification. Architect Kálmán Lux suggested restorations to the chapel and gatepost. These works were concluded between 1934-36, funded by the Károlyi family. It was placed under heritage protection in 1941. The first archaeological excavations started with the lead of Juan Cabello and István Feld, in the late 1970s. These led to the restoration works of 1990.

The whole of the castle and 90 % of the walls have been excavated, including the original wooden structure of the cistern. Tiles of the original stove decorated with gryphons and the tree of life were found also, which are two of the most important religious symbols of ancient Hungary. The gryphon has become the symbol of the castle: as it did for so long, it will keep protecting the fortification.

The castle has been undergoing renovation since the 1990s. By 2016 the outer-bailey, the chapel, the keep and the lower bastion were rebuilt. You can find the Castle Handicraft House in the center of Füzér as well as the Folk Museum of the 1940s-50s. The Visitor Center has an exhibition on the castle as well as the natural and cultural heritage of the village.

There is a multitude of public events held at the castle. 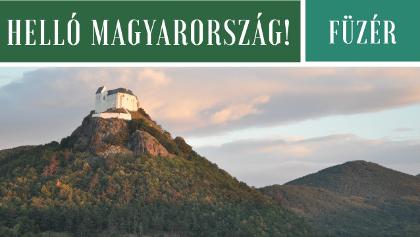