It is worth visiting the little village in Nógrád County not only because it grants a travel back in time, or because they bake the best röschti here, but also because of the myriads of novel ideas that await visitors at the 800-year-old castle. Visitors can study a kitchen, bedroom, smithy, and a farm building from the middle ages; they can also examine the rich finds of the excavations, for example, the silver dinar of Mathias Corvinus, or Turkish pottery pipes and weapon fragments.

Once upon a time, there was a powerful lord called András Kacsics, lord of Pusztavár. He fell hopelessly in love with a beautiful, young woman. Overwhelmed by his emotions, he kidnapped the woman and locked her up behind the walls of Pusztavár. He did not take into account that the nurse of his beloved was a witch, who cared for the youth dearly. The witch made a pact with the devil, who sent his sons to the castle in the form of crows to take away all of its building stones until the girl gets free. They piled the stones up at a different peak – thus the castle of Hollókő was created.

Such is the legend of founding the castle. It is not surprising that the peculiar-shaped castle sitting atop a high peak so inspired the superstitious: its walls spiraling like a snail’s house and its old, pentahedral tower revive memories of childhood tales about dragons, gnomes and the youngest prince.

In reality, the castle was built at the end of the 1200s on top of a 362-meter high cliff by the – surprise – Kacsics family. As it was usually the case, the castle changed hands several times during the centuries. Máté Csák and Charles Robert were among its owners. Every single lord altered it according to his liking or added something new. Maybe that is the reason why its walls spiral – allowing for the lie of the land – in a somewhat peculiar shape.

The aforementioned works included several novelties for visitors. The keep, the most mystical part of the castle, was opened, where an exciting treasure hunt is also part of the program. Legend has it, Máté Csák and the Turkish had hidden countless treasures in the castle.

Those interested in how a medieval kitchen, bedroom, smithy, and a farm building operated will find their curiosity satisfied. The exhibition contains a rich collection of finds, the silver dinar of Mathias Corvinus, or Turkish pottery pipes and weapon fragments among them.

Even though the history of the building is presented through the use of traditional methods, the use of modern, 21st century technology enables visitors to experience the castle of Hollókő through ways never seen before: for example a virtual walk and the use of a large touchscreen. The electronic guide allows visitors to listen to the explanation to each exhibition piece at their own pace, or if with a group, everyone can listen to the guide no matter their distance.

A gigantic black raven signals your arrival to the village. The 67 remarkable houses and 800-year-old castle of this little village in Cserhát have been on the UNESCO world heritage list since 1987. The old village is full of whitewashed palóc peasant houses with a veranda, wooden balustrades and thatched roof that was so typical of the era and the region. Many of them serve as display houses, artisan workshops or museums nowadays. If you visit this village, do not forget to taste the amazing palóc soup, the röschti, or the görhe (a kind of sweet pastry). The inhabitants of Hollókő are renowned for their respect for traditions, which especially shows on notable days of the year. Be it Easter, harvest festival or Saint Martin’s Day celebrations, the whole village dresses up in Hungarian folk costumes and celebrates the way their forbearers did.

Open all year round. For more detailed information check the castle's website. 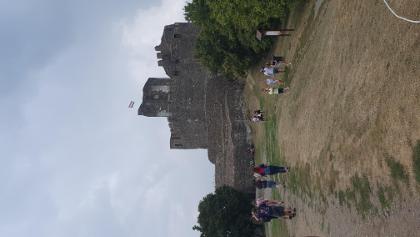 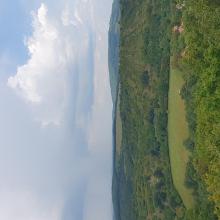 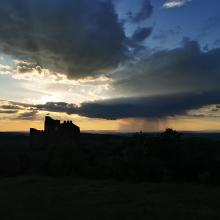 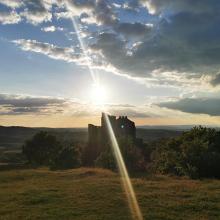